The lobbying tour, organized by Corporate Europe Observatory, took place on December 3rd 2015, with the goal of bringing the buildings of the Parisian business district La Dèfense to life: they are seats of power, where decisions are influenced, where lobbyists work and wield power.

Read more about the tour and its first stop (Engie) at Lobbying Chronicles: Part I

EDF (Électricité de France) is a French electric utility company, one of the largest producers of electricity in the world, whose primary energy source is nuclear power. With its 58 active reactors in France, EDF tries hard to greenwash nuclear power and promote it as a form of sustainable energy. EDF has also been working with quite a conglomerate of companies to achieve the idea of smart cities. EDF is owned 84% by the French government, and is an official sponsor of COP21. As sponsor, EDF gained more visibility as a “green” energy source despite being once of the main players blocking the European transition to renewable energy. In other terms EDF got the chance to “sponsor” itself to make sure that despite the large losses faced by the nuclear industry, and the need for deep subsidies, business as usual is safeguarded.

In terms of greenwashing, EDF PR campaigns have tried to “humanize” nuclear energy, showing in their ads faces of local people working for their plants. By doing so, EDF tries to portrays itself as a sustainable, people-friendly source of energy, while in fact it is just another false solution.

EDF has been pushing for decarbonized electricity, while at the same time not really questioning what is the real source of energy and what is its carbon footprint. While EDF promotes nuclear power as a low carbon solution to climate change, nuclear is a highly carbon intense energy source, not so much in the process of electricity generation, but in the mining for uranium. Overall, the lifecycle assessment, which takes into account the pollution, the waste, and the infrastructure, shows that nuclear energy is not as sustainable as they try to sell it.

As if greenwashing was not enough, EDF has mastered the art of “bluewashing”. The term indicates the practice of EDF and other companies, of priding themselves to be the official  solutions, by associating themselves with the UN standards and the UN flag.

The air of La Défense is very thick, one can feel the frenzy of the power 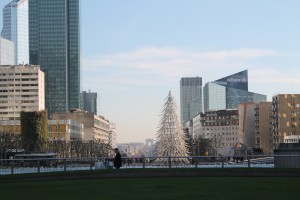 processes. This area is a seat of power. The lobbying tour brought us to the offices of those who have a grasp on the UN talks and the faith of the climate. As it is predictable, the tour seems to be ending on a very sour note. Yet, in contexts such as this one, when people gather to learn more, to be aware and to acquire a critical perspective, it is crucial to ask the question of what can be done next, what can be done about the issue of corporate power and corporate capture of the UNFCCC spaces.

What needs to happen is that civil society and activists need to be informed, and keep raising their voice, and in doing so, increase awareness of the issue. By doing so, one can shape the narrative, which consequentially poses pressure on the question of implementing concrete regulations against lobbying, and their development within both the national and the international framework.

Public support is key: public opinion need to change, the narrative needs to change. Citizens need to be aware and active in their opinions and choices. From there, grass-roots movements need to pressure governments to pursue the systematic change that we need to stop and survive climate change.

Why the corporate capture of COP21 means we must Kick Big Polluters Out of climate policy; Corporate Europe Observatory.

Cause for Hope after COP21; Corporate Accountability International

Who ‘s standing up to big polluters in Paris; Corporate Accountability International