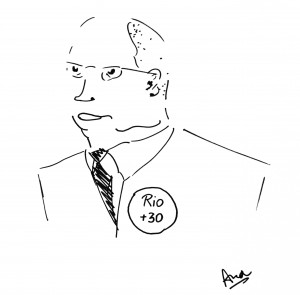 Side events at the Informal-Informals in New York provide insight into what civil society is up to while the formal informal negotiations go on inside the ECOSOC conference room. Major Groups and NGOs are hosting discussions outside of the negotiations in order to open dialogue with civil society for input into the importance of their messages directly from the constituencies they represent at the informal-informals. It feels like the only enthusiasm for using Rio+20 as a platform for real change is coming from these side events, largely organized by progressive groups.

Member states are aware of the possibility of influence in these Major Group discussions and big names in the negotiations are making their presence apparent in the message being taken away from the side events. A notable presence in side events such as The Role of Major Groups/Civil Society in the Future IFSD and Key Messages of Indigenous People for Rio+20 has been Jean-Pierre Thebault, the Ambassador for the Environment from France representing the position of the EU and France.

Thebault’s involvement in the side events feels strategic and reminiscent of the classic lobbyist. His manor is polite; he waits until the end of the discussion to engage in dialogue. His stance is similar in most events. In The Role of Major Groups/Civil Society in the Future IFSD he affirmed that France has always been a proponent of direct involvement for Major Groups in the decision making process and that they are doing everything they can to influence the EU’s position in order to put forth text that puts power into the hands of the people that governments represent. His message ended with that it was originally former French Minister to the Environment and Green Party leader Brice Lalonde, that proposed that the negotiating space be comprised of fifty percent Member States and fifty percent Civil Society and Major Groups. Thebault pushed for access to documents and speaking time at events such as informal-informals, a process which civil society can only observe. The room ate up the statement, happy with a body such as the EU being on board, but unaware of the consequences from letting lobbying bodies like theirs push the conversation without criticizing their position.

Thebault was again present in the Key Messages of Indigenous People for Rio+20 with largely the same rhetoric. However, the EU’s agenda of painting themselves as the heroes of the process while still making an effort to water down policies was poorly hidden.

Indigenous Peoples have the ears of the member states that represent them. They are an effectively organized group that has made large gains in influencing policies they are a part of. During the end of the discussion is where Thebault’s argument faltered. The discussion had agreed that the next step to action is to pressure large groups like G77 and the EU, and that they need to push with urgency. Thebault followed the consensus by reaffirming that the Major Groups need to push for access with urgency or “else you’ll be planning for Rio +30.” There was a follow-up question and Thebault’s response was contradictory but predictable. He stressed that Major Groups, especially Indigenous Peoples, should only push for access and not full integration and participation in the decision making process, as a small step to begin the process of integration.

Hasn’t it already been twenty years? These types of small steps have gotten us only marginally closer to integration, with member states continuing their influence while the Major Groups’ voices remain completely devoid of any real decision-making ability or influence. The time to push is now; we have the possibility for interventions but Major Groups sit by and can only observe as the tyrannical dismantling of the future we really want takes place.

The outcome of Rio must be a concrete start to implementation of the equitable idea of Sustainable Development. It’s been twenty years too long. Thebault is correct, if we don’t push now and push hard, we are only planning for Rio +30 but we must be careful of pushing a diluted agenda. This is our future that is being picked apart, we must have a voice in its outcome and we’ve waited long enough for substance.