Today's adaptation negotiations took a turn for the worse as developed and developing countries started to disagree about implementation issues. The Bonn adaptation meetings have focused on two important pieces of the Cancun Adaptation Framework: the Work Programme on Loss and Damage and the support for the National Adaptation Plans. The Loss and Damage stream is important for making sure that countries are able to deal with the impacts of climate change related events like natural disasters, sea level rise, and drought. If they don't have help with these impacts, they will incur the costs of something they had no part in creating; this would be a grave injustice. The National Adaptation Plans (or NAPs) are to support developing countries to come up with and implement plans that will integrate medium and long term climate change adaptation into their development plans. The NAPs are supposed to build on the National Adaptation Programmes of Action for the urgent needs of Least Development Countries which are moving towards their implementation phase now.

The 'adaptation community', as they like to call themselves, are a small group of negotiators who work closely together on all the issues. The major players are from the US, the EU, Canada, Australia, Norway; Bangladesh, Bolivia, and Argentina for the G77; Nauru and the Cook Islands for the Alliance of Small Island States (AOSIS); Bhutan and Timor Leste for the Least Developed Countries (LDCs); and Tanzania and Ghana for the African Group. The former US negotiator for adaptation, who has been around for some time, retired this year and her secessor is in her first meetings of these kinds. I haven't been able to gather any information about her, but she seems like an highly competent professional who seems to have a lot of experience in the adaptation field that goes beyond the UNFCCC, though she is a less experience negotiator, she will definitely be a force to be reckoned with in years to come. Ever since I started following adaptation negotiations in Cancun, they have moved along quite productively and have worked through disagreements and made compromises together.

Today, however, was a total change of atmosphere. It started off in the consultations on Loss and Damage, where the Canadian and Argentinian co-chairs presented their draft text that quite explicitly excluded calls from the G77+China to develop a mechanism to address Loss and Damage, when COA's very own Juan Pablo Hoffmaister ('07) for Bolivia pointed this out, developed countries retorted that  laying the foundations of a mechanism would be premature given that the work programme still needs to conduct 3 more workshops. This is a common tactic from developed countries: they call for more information, more workshops, and more academic exercises as long as developing countries want action and implementation and things aren't going their way, but as soon as they frame the debate in their own terms (read: more work for developing countries) they call for urgency of action. As developed and developing countries went back and forth on the issue of creating a mechanism, negotiations didn't seem to go anywhere, and the chair ended up proposing that the group meet again immediately before COP 18 in Doha, Qatar. This seems like a desperate effort to accommodate everyone, but is unfortunate given that reports from these meetings are supposed to reflect submissions from all parties, not just developed country parties. 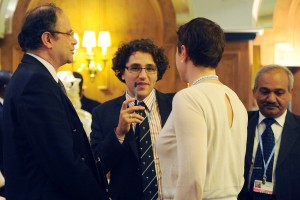 The tension picked up again in the working group on NAPs. Philippines negotiator Bernarditas Castro Muller (one of the best negotiators for the G77 and the biggest thorn in the US' side, she really knows her convention and how to negotiate and has been called the 'Dragon Woman', the US tried to have her fired before Copenhagen, but Sudan hired her right back on) has been sitting in on NAP negotiations, which is unusual for a negotiator of her status. This gives us a clear indication that the issues being discussed are broader than they appear, namely, that they relate to finance. Bernarditas was there to point out that funds for adaptation need to be scaled up and that reform of the way that adaptation work is implemented (or isn't) by the Global Environment Facility (GEF) needs to happen. After noting that, she pointed out that the NAP process needed to not just be for LDCs, but for all developing countries and that developed countries were trying to shirk their responsibilities under the convention. This fight wouldn't normally come up so bluntly, it has been an underlying conflict since Cancun and a compromise of relatively vague language on this issue was reached in Durban, but her bringing it up so aggressively represents larger political manoeuvring at play.

I suspect that the source of this manoeuvring can be traced back to the last year of work on the Ad-Hoc Working Group on Long-term Cooperative Action (AWG-LCA). In today's AWG-LCA plenary, parties went through the agenda and decided what to move into contact groups, developed countries consistently got their way about what was to be discussed, and developing countries got few of their asks for contact groups, one of the larger arguments was whether to have a contact group on 'enhanced action on adaptation'. Developed country parties, led by Norway, argued that this was unnecessary because there were already adaptation negotiations going on (mentioned above) and the new adaptation committee that should be finalised in Doha will take care of the rest. Developing countries were quick to point out that there are all sorts of activities on adaptation that were supposed to be undertaken that have not yet occurred and that the adaptation committee has not yet been set in motion. There are still many significant gaps in adaptation work, particularly adaptation support for developing countries that are not Least Developed Countries, and Bernarditas' joining the NAP negotiations was a signal to developed countries that developing countries are tired of being pushed around on this issue and are ready to play hard ball.

The question for the future will be how well the G77 sticks together, adaptation negotiations are usually characterised by a very solid block of developing countries with the G77, AOSIS, LDCs, and the Africa Group consistently supporting one another's statement and the EU running around trying to figure out their own position, but with Sudan's plea to Bernarditas at the end of the NAP meeting not to hold this important issue for LDCs hostage, it is clear that the G77 will have to work to keep their group strong. Nevertheless, it is important not to blame the Philippines for standing up for all developing countries when the developed countries have done such a pathetic job of financing and implementing adaptation activities. Adaptation and mitigation are supposed to be equal under the convention, but because rich countries haven't figured out a sure-fire way to make money out of adaptation, they have mostly avoided the issue and stalled progress by calling for more and more expert workshops and research papers before anything can be done. It will be interesting to see how this stalemate gets resolved over the next week as parties are eager to have solid outcomes in Doha, it is clear that major compromises will need to be made on both sides.