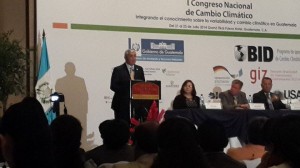 As the President of Guatemala walked out the room, the First National Congress on Climate Change came to an end. Behind the President, Otto Pérez Molina, came a parade of political figures: the Minister of the Environment and Natural Resources, the President of the Guatemalan Congress, a German Ambassador, and several other local and political authorities. Of course, they were swarmed by the participants, some of whom eagerly shook hands with them. I took the elevator down to the fourth floor, and Mr. President  Afterwards, all 500+ participants disbanded into the city, carrying the sting of words and ideas we had come across in the past day and a half.

The third and final day of the Congress saw a lot of statements by government authorities and scientists, most of whom repeated Business As Usual things around climate change (in addition to shift responsibilities between private sector and civil society), so I’ll spare you and skip to the interesting bits.

Fidencio Lima Pop, the President of the Guatemalan Congress’ Commission on Climate Change, walked us through the plans for implementation of the new Climate Change Law, approved on October on 2013. Among other things, he considers we need a National Climate Change Fund, to handle some of the financial mechanisms to address adaptation in Guatemala.

Hugo Beteta, representative of the UN’s Economic Commission for Latin America and the Caribbean (ECLAC), spoke about the economics of climate change. Beteta considers that climate change has two separate sides, the political (UNFCCC and National legislation) as well as the economic and commercial, and Guatemala not only has to adapt, it has to stay competitive in the international markets. ‘Reducing emissions can protect us from recessions that may bring the country down to its knees [economically]’. He had some interesting charts on how our working-age demographic will peak  in 2045, and that will be an economic opportunity for the country (though I fail to see how that is directly related to climate change, write down a comment below if you have thoughts on this.) Beteta listed the economic losses authored by the 5 largest natural disasters since 1982 (2 hurricanes, 1 tropical depression, 1 flooding, and 1 hurricane/volcanic eruption combo): they amounted to USD$3500 million. Since investing to decrease this vulnerability has a high risk, he suggested we create a National Development Bank to facilitate investment in adaptation technologies. Moreover, he’s not a believer on Private-Public Partnerships (which have been a bit of a panacea over the congress): ‘all risks get absorbed by the state, and all profits by the private sector’

Finally, he added two very critical comments to his talk: we need participative and legitimate adaptation processes, and he asked everybody to make a renewed social pact for equal sustainability.

Dr. Ana Ríos from the Inter-American Development Bank addressed the audience next. her talk: Private Sector adaptation to climate change. Her main highlights: climate change will impact agriculture in Guatemala, and therefore a huge part of our economy. But she had good news: the cost of implementing adaptation measures will only be one fourth compared to the potential losses climate change will bring. Not only that, Dr. Ríos tried to wow the audience explaining that Nestlé, Walmart and Starbucks are already working with their rural employees to adapt: ‘improved’ cocoa and coffee seeds (euphemism for GMOs.)

Four Municipal representatives –the smallest governable unit of land in Guatemala– representatives then took the stage and shared experiences on adaptation. They gave an account of how they are usually the first government line of social protection when natural disasters (not uncommon in this country) take place. Their panel was a great representation of an area of implementation that’s not usually salient in global negotiations, but nevertheless quite important when it comes to practicalities.

On the scientific research end of things, the three axes of the conference (climate science, mitigation and adaptation) presented their research recommendations as outcomes of the different presentations, in order to craft a National Research Agenda on Climate Change. Briefly, they are as follows:

Among other things, Climate Science should create a strategic body that can integrate scientific, economic, sociological and traditional information around climate change. Guatemala is expected to have up to 20% less rain between now and 2050, and this will create major demands for adaptation, not only in agriculture, but in the myriad of microclimates the country has. [And at this point in the presentation, the speaker was interrupted as Mr. President was entering the building, and we all had to stand and greet him into the room.] Therefore, it’s important (as said before) that adaptation be context specific and, as Vicente Barros said on the first day, we need climate and non-climate information to start building models that are context specific. Moreover, internal technology transfer is necessary to accomplish adaptation.

Mitigation had little to add to what had been expressed before. Guatemala is responsible for less than 1% of global emissions, so reducing emissions is only –as Pérez Molina militarily underlined later– a way of upholding our commitment along with the other countries ‘who are more responsible for this’ than us. Nevertheless, if we reduce emissions, we can tap into global markets with less carbon-intensive goods, and capitalize on those niches.

Adaptation was by far the longest and most specific one. According to the outcomes, we need to handle impacts with a long-term vision (which is hard because there’s not many certainties on how things will change), but there were some very positive (however incomplete) ideas:

– the creation of a national family kitchen-garden program

I have my reservations about systematizing traditional knowledge, especially if it has to do with the use of living things that could be then patented, and/or sold back to our countries (much like what happened with organic agriculture), I think all of these are sensible recommendation for a country that’s heavily reliant on agriculture, and full of young people. I would have hoped more of the authorities that are convinced in traditional knowledge could begin to talk about agroecology research, and that we could find ways to move away from conventional agriculture, which will not stand the curve-balls thrown at it by climate change fast enough (or at all.)

In the final strait of the declarations, Alex Guerra, head of the organizing team for the Congress (and fellow UWC alum), handed a preliminary report of the Congress’s findings to the President, as he is the chair of the National Committee on Climate Change.
Following a short Thank You by the Minister of the Environment and Natural Resources, the president of the Congress, Arístides Crespo, articulated the importance of climate change for Guatemalans. “It is an issue of special trascendence [for our country]”, and he event went as far as to call it a “silent war” that was taking place (between life on earth and the actions taken by some humans, I guess?). He closed with an inspiring quote: “We all think of leaving a better planet for our children, but we should think about leaving better children for the planet.”

At the end of the Congress, President Otto Pérez Molina finally stood before the podium, and spoke characterized by his I’m-A-Former-Militar mode of address (I almost felt barked at, but I’m also too sensitive to anything this guy has too say.) Pérez Molina spoke to his people: ‘climate change is everyone’s resposibility’, ‘and all parties to the UNFCCC most protect the climate system’, based, of course, ‘on the principles of Common But Differentiated Responsibilities (CBDR) and Equity. He explained that we don’t have to sacrifice our access to development ‘which we still don’t have’, but ‘we won’t meekly assume our inequity’ before other countries. ‘May mother nature inspire us to keep working’. However, when speaking about CBDR, Mr. President raised an interesting concern. CBDR should apply not just at the international level, but at the sub-national level. Even though Guatemalans have contributed little to climate change, within our highly unequal society, some of us still continue to add stress to the climate system (and the planet) in much heavier ways than others. Food for thought for those of us environmentalists who are better off than the rest of our societies.

And so, two and a half days of hearing the c-words together: climate+change, a clear(er) picture was painted about climate change on my shredded country, which left tons and tons of questions to move forward:

– will climate change be a defining factor to heal wounds and work together in a post-conflict society?

– will ‘traditional’ knowledge and its successful implementation in the face of a changing climate begin to strengthen claims against positivism?

– can more young people begin to care and to learn more so we can preserve knowledge and save lives?

– will my blogs ever get shorter?

All we can do is act, wait and then see.

thank you for reading all this way!, and leave comments and questions on the space below, and look out for potential spanish versions of these blogs (once my fingers have healed from furiously typing)