Venezuela’s government, controversial and criticized by many in the international arena, made the effort to do something that not many other governments would do today: invite more than 130 groups both of Venezuelan and international social organizations and representatives of social movements to Margarita Island for a week (full list of guests). Besides enjoying the sun, the seafood, the ocean and salsa bands, all those who flew across the world to be together, social activists and environmentalists both from grassroots groups and NGOs who carry the banner of climate justice in their fights, devoted their days to work on the construction of a new vision of society, a more egalitarian one, less consumerist, less destructive of all around us.

Before going any further, two steps back:

in last Climate Change Conference of the United Nations, COP19 in Warsaw, it was announced that the next COP will be in Lima, Peru in late 2014. COP20 Lima has an enormous relevance for Latin American social movements who identify with the struggle for climate justice not only because of the current pressure at the negotiations to achieve real progress on mitigation and adaptation to climate change, but also for the potential incidence of civil society in their governments, and most importantly for the opportunity of connecting and strengthening the networks of social and environmental justice. Then, it was in Warsaw when the Venezuelan government announced that they would host the preCOP, a Venezuelan government which bears as an insignia the communist legacy of Hugo Chavez, and is identified within the UNFCCC (Climate Change Conference of the UN) as a country with sharp criticism of the lack of ambition by many other nations in regard to dealing with climate change. The preCOP has always been a humble event, rarely mentioned, only attended by government representatives where conversations happen in preparation to the official negotiations at the COP.

The Venezuelan government was never interested to follow the usual line of the preCOPs, lines that lacked transcendence and are exclusive from the voice of civil society. This is how Venezuela decided this time it will be a social preCOP, mostly guided and structured by as many civil society organizations and social movements as possible. This Venezuelan initiative is unusual, because the reality is that few governments want and would let us, as civil society, talk and organize ourselves in a given space. Governments are usually afraid of such assemblies. In this process, however, the government of Venezuela, led this time not by Chavez or Maduro but by Claudia Salerno, official delegate to the UNFCCC, assured the preCOP attendees we were totally free to make of the space what wished and that the government would gives us all they had:  their independence as a sovereign nation to take to the official spaces of negotiations the people´s demands and perspectives on climate change.

Venezuela received criticism after criticism from many pundits who branded them incoherent for being an oil producing country yet at the same time being the hosts of a social gathering to talk about climate change which would necessarily attack, with full reason, the extraction and production of crude oil as the main factor of carbon emissions. Many decided not to attend the social preCOP for these reasons, but others decided to consider to put into perspective the Venezuelan context before throwing away a unique chance of encounter. This is how Venezuela, against all odds, logistical obstacles such as cancellation of flights and airlines by the compulsive politics that refuse to have good relations with Venezuela, and despite being the first time organizing an event of such magnitude, they managed to have us all meet face to face and have the space to discuss about our future without censorship or reproach. Few governments, even in better economic conditions than Venezuela, would not have lifted a finger to make this valuable space for integration and dialogue exist.

The first round of the social preCOP started in preparation for the second meeting which will also be in Margarita in early November. The idea was to mount the foundations now in July for the official preCOP in some months. These bases were constructed during five days of intense work. The first two days were a mix of panels and open discussions that had to do with the action of local governments in the global response to climate change and the prospects and initiatives of youth in regard to the state of our society.

There followed three days of discussions among the attendees who were divided into 5 roundtables each with a particular issue at hand: 1) social impacts of climate change; 2) Climate Ethics: responsibilities and respective capabilities; 3) Social participation in decision-making; 4) Fighting climate change: direct actions for transformation; 5) Responsibilities North-South: Northern commitments to strengthen action in the South. The debates were facilitated by members of civil society chosen within the same assistants; the government had little to zero presence in these debates, which is worth clarifying here. The topics were broad but there was a clear premise ¨ change the system, not the climate ¨, and the outcome of discussion during these days is the Margarita Declaration consisting of 62 points some on specific issues within the climate change negotiations, as well as other crosscutting issues which delegates at the UNFCCC usually do not take into account such as the impact on education, food sovereignty, the rights of Mother Earth, the adoption of new ways of life unattached to the idea of development and intergenerational exchange as solutions to the rising global temperatures and its disastrous effects.

Barring any idealism, it´s logical to understand that the discussions were not always sweet and easy going, which was not the expectation with such diverse contexts and visions within the roundtables. One of the most complex issues was clearly the urgent reduction of oil extraction to control carbon emissions. Contrary to what many speculated, they Venezuelans, without any sort of censorship by the government, agreed with the necessary cuts in this industry, and the Declaration included in paragraph 15 that: ¨ in order not to not exceed 1.5 degree increase in temperature, it becomes necessary to leave 80% of the known reserves of fossil fuels in the ground ¨.

To achieve a common stand is always a frustrating process that requires patience and perseverance, but there is no doubt that social preCOP generated an atmosphere of mutual work where the maximum effort was put into finding stronger and more effective ways to work together, among each other, shoulder to shoulder, on the long road of  environmental and social justice. The energy felt in preCOP was of momentum and construction, not the energy of fight  and attack that dominates the official spaces of the UNFCCC. We went to Venezuela to find ways to be better friends, to strengthen our ties and to take advantage, frankly and honestly, of the radical position that the Venezuelan government has built within the UNFCCC. 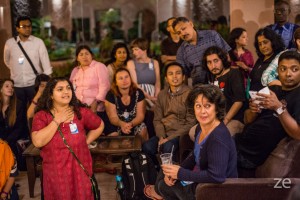 The Margarita Declaration will be read by President Nicolas Maduro at the Presidential Ban-Ki Moon Summit in New York in September where it is expected that for a day the presidents of the world at the UN encourage themselves to increase their commitments to mitigation, adaptation and payment of damages and losses for the impacts of climate change. Between September and November the plan is to feed the Declaration with more views and perspectives by opening it up to the civil society organizations that could not be directly present at Margarita.  In November when the official preCOP takes place, even more representatives are expected to fly to Margarita this time to give the Declaration a more focused perspective on the internal processes at the UNFCCC. The hope is that with this polished and sharpened Declaration a greater impact and the largest mobilization of civil society will be rallied in Lima COP20. The relevance and significance of a social declaration among others that have been already written , like Cochabamba Declaration in 2010, is debatable. However, what is important and worthy of the matter is that what happened at the social preCOP was a moment to accelerate a process of incubation: Latin American society as well as society from other regions of the world which have been shaken again and again under false ideas of development, are brewing enormous social power, a power that has gradually seeped into the structures of the system and is increasingly taking stronger desires for a radical transformation of the current hegemonic paradigms of life.