It is Thursday of the second and last week at the climate negotiation in Lima. As always after a quick and minimalist breakfast in our hostel I walk the three blocks down to arrive to one of the special shuttle-bus stands, at which some of the ten thousand conference participants take the daily route to arrive at the conference’s convergence space. On the bus, right before putting on my headphones, I eavesdrop a conversation of two men in beautiful suits sitting right in front of me. They are talking in Spanish about the different possible words Kerry might use in his speech that afternoon, to put forward the US’s agenda. Not knowing any other “Kerry” associated with the US, I assume the two are talking about John Kerry, the US Secretary of State.

When I arrive at the conference I pass the news to the first person I encounter and discover that Kerry’s arrival is of news only to myself. Apparently it had been known two days ago that Kerry would arrive at the conference. I also find out that Kerry is going to give a press conference at 3 pm (probably a closed conference only for press people). But determined, I set up my mental clock so as to be at the gates for the press conference zone at 2.30, just in case it is open for all, or else, just in case I get lucky. I continue with my day that includes going to an NGO meeting with the head of the Chinese delegation and right after continue to film a small action with some friends from [Earth] about Carbon Markets and carbon offsetting.

At some point, while filming, I notice a small gathering behind my back. It is clear, especially in the second week of the negotiation (also known as: the high-level week — in which high-level governmental officials arrive) that if there is smoke, there is fire. I turn my back and one of my friends, Adrian, whispers in my ear, “this is Al Gore!”. Al Gore damned it. The ex-vice President of the US and the man who, by writing and being the protagonist of the film An Inconvenient Truth, made climate change common knowledge (ohh the power of cinema…).

We, Adrian and I, look at each other and almost instinctively decide to act in order to utilize this opportunity. We follow Gore, I click open the camera again and Adrian goes into action “Al, Al (!) can we interest you in our initiative? It is called Cheat Neutral, it is a creative way of explaining carbon offsetting. If you have ever cheated on your wife you can give us some money and we will pay other, more loyal partners, for their loyalty… In that way we will keep the balance of cheating in the world… Kind of like carbon offsetting.” Al looks at Adrian, nods and asks for a card, which we have, and tells us he will look into it afterwards. All this is happening while he walks with an entourage of at least six assistants and another dozen or so cameramans. I turn the camera to Adrian who smiles, blinks one eye and sticks his tongue out back at me saying “Al Gore in the bag !” 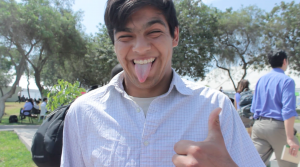 Apparently, again, I was the only one unaware that Al Gore had arrived today. I am also then informed that he is giving a small talk with “observers” starting at 2.30. Observers are the ones who do not have a negotiating role within the conference, including, NGO’s, universities, scientists, business entrepreneurs or any other persons not including press people or country representatives. Since I will be allowed in, being an “observer”, I pack my stuff and walk to the room where the meeting is held. It is fairly packed with people but I find space in the corner where I set my tripod and begin recording.

My mental clock however does not fail me and I remember the need to leave shortly for the slight chance of catching Kerry as well. I leave the room about 2 minutes before Gore finishes the meeting, right when he announces he will take one last question. The walk from one space to another, in this absurd-looking UN-made bubble, can sometimes be fairly long and sweaty. I power walk and it takes me half the time to arrive at the press conference zone, which, now I see, is bounded, fenced and heavily secured. I break to the left when all of the sudden I bump into Gore and his entourage, yet again (!). Not surprisingly he was taken by a special and much faster route. Someone stops him and the two begin to chat, which gives me enough time to click open my camera and resume filming again, this time from real close. I attach myself to Gore’s entourage.

Gore and the man with whom he was chatting then salute each other goodbye and Gore, together with his entourage, of what seems to be now about seven white men with black suits, begin walking up a staircase. The men walk firmly up a staircase and I, standing right behind them am now faced with a decision to make. I hesitate for a second and then think “Fuck it, I am following them!” I walk decisively and with my head up, two steps behind Gore’s butt. The guards, the UN police, and the rest of the CIA looking men all make space as we enter the door at the top of the stair case, all the while I am holding my camera up on my long tripod. My badge, the so-called “observer” badge is flipped to reveal only its blank white side.  As we enter the second floor of the Press Conference zone and continue walking I examine the space around me with an attempt not to rise suspicion. I notice some people on the right side with black suits and shady sun glasses, and a small area on the left that is fenced with those black thin airport-like elastic barriers behind which more than 30 photographers click and flash.

The press conference room, so I learn, is already packed with reporters all waiting inside for secretary Kerry. Still behind Gore I am in the main hall of the conference zone in an area I am most definitely not allowed to be in. Another man instantly approaches Gore that I recognized who goes by the name, Todd Stern, the top official US delegate to the conferences, at least since the Kyoto conference in ’97. They greet each other and decide to wait together for Kerry. All that I learn by eavesdropping while standing no more than one meter from them. They chat for bit until Kerry walks up the stairs and enters the main hall. He walks in and greets Gore, and Stern takes a step back to give them some private space. I don’t, I decide to stick firm with them. I am now standing with all three of those top US politicians, overwhelmed, excited and fucking afraid to be caught I try to keep cool and focus on filming.

Every now and then I look down to make sure my yellow observer’s badge is still facing my belly—revealing only its blank white back. While looking down at my badge I remember that today is the first day I put on my one and only nice shirt and that somehow relaxes me (even though that shirt, the gray one, you probably know it- since it is the only nice one I have – is also kind of loose and easy-going-looking). After a short conversation the group-of-three and their entourage walk in the conference room straight into a wave of camera flashes. I am still behind. I find my position and begin recording the session that starts by Stern introducing Kerry. My camera’s battery runs out after 5 minutes. To be expected. I continue to record sound with my external recorder. 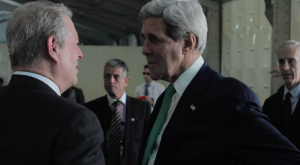 I sit there and listen to Kerry talking beautiful words that stress the importance and urgency to reach a climate solution; but underneath those beautiful words I hear him continue to emphasis the idea of responsibility for all. He is reacting to one of the hot topics that are currently on the table in an attempt to reach a new agreement next year in Paris. The UNFCCC established an important cornerstone of differentiation between developed and developing countries, a cornerstone that the US is now attempting to abolish in the new Paris agreement. That cornerstone known as the Principle of Common But Differentiated Responsibilities (CBDR) sets the idea that a climate agreement must be retroactively imposed – meaning that it must acknowledge the historical responsibility that industrialized (developed) countries have in causing the problem of climate change. Unlike developing countries, developed countries – the US, Europe, Australia, Japan etc. – are the main polluters and the main causers of climate change and hence must take greater responsibility in combating climate change. Kerry continued to talk about the shared responsibility reaffirming what everyone already knew (including those two beautiful suit men talking in Spanish in front of me on the bus). The US is standing still in its position while the G77 group and China (also known as the developing countries group) are standing still in their rightful position of having a different responsibility. Kerry continued a while longer, finished and left the room together with Gore. Maybe they noticed I was missing from their entourage. Maybe they finally realized they had an infiltrate. Who knows… 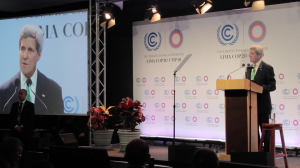 Twenty minutes later, laying on the grass, barefoot and exhausted, between people in suits sitting next to chairs and tables, I hear planes in the sky. I lift up my head together with the rest of the crowd and see two green army planes and a private jet in between. Probably Kerry… came in and straight out. Living a life of an alien on earth. An alien that is supposed to bring the answer to mother-earth. How futile. Tomorrow the conference will end. And I will bear witness, or else, be an “observer” for the lack of any real development to reach agreement, or like The Guardian summarized in the title of its article from today : “Lima climate talks agree on just one paragraph of deal with 24 hours left”.