The afternoon session at yesterday’s negotiations was set aside for a very productive and important dialogue. We heard from member states about their experiences regarding their approaches and challenges with implementing the Sustainable Development Goals. Four countries – the Netherlands, Myanmar, Colombia and Togo – all had presentations prepared for the General Assembly and after those presentations, the General Assembly heard open interventions from the floor. 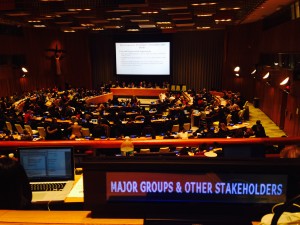 The intervention session began with Colombia. The representative spoke about the country’s high level of inequality, poverty and unemployment but followed that with a passionately charged statement of determination to end such a long, internal conflict. The representative spoke of Colombia’s good track record for implementing the Millennium Development Goals (MDGs) in a sector based approach and belief that the good track record will continue as the Sustainable Development Goals (SDGs) are implemented. Colombia does indeed have their own National Development Plan (NDP), and they have come to find that 60% of the targets in their National Development Plan are already aligned with those of the SDG targets. Some aspects of their NDP involve eradicating poverty in an irreversible manner as well as attaining development through economic, social and environmental dimensions. They have been very focused and attentive of implementation but they have realized that there are indeed implementation gaps – which are [at a national level] the need for transfer and development of clean technology, capacity building in research and development as well as financing for adaptation.

Much like Colombia, Togo found that they generally face the same challenge of clean technology transfer and need support in that area as well as support with water sanitation and technical engineering in the area of sustainable development. The representative of Togo stated that – in regards to implementation of the SDGs – the country has found that they are facing three main challenges: the first being weak human and technical capacity within the public administration, civil society and private sector; the second being moving away from unsustainable modes of consumption and production to more sustainable ones; and third being a scarcity of resources. But since adopting the MDGs, Togo has found that a great retention has been given to poverty reduction and believe that the SDGs will be the foundation of a new framework, especially in regards to national development.

The Netherlands began their intervention by stating that “that we should be leaving no one behind while at the same time respecting the planet” – which I think is something that many countries stand in solidarity with and should continue to keep this as a center of focus when discussing and negotiating these SDGs. The representative spoke of the Netherlands strong commitment to implementing this agenda at a national and international level, but stated that they believe this will be hard to carry out by the end of this summer. A few challenges that they have already faced are addressing the issue of poverty eradication, health, water sanitation and sustainable consumption and production. Because the Netherlands already has such a low poverty rate, they are finding that the goal centric to the eradication will be harder to tackle simply because of that reason. They also found the same problem in regards to health, simply because they already have a low death by traffic rate and the fact that have a natural expertise with water sanitation [being 3/4 comprised of small island states] doesn’t make goal 6 very relevant to them.

The final presentation was given by Myanmar. The representative stated that Myanmar has witnessed remarkable and progressive changes [specifically over the past four years] aligned with the MDGs and that has given them strong hope for the SDGs implementation. They realized that their government cannot implement all the goals and targets alone, so they want to promote the idea of a collaboration and participation internationally while also recognizing that prioritization is a must. They have a vision to become a modern, democratic and peaceful developed democratic nation and really hope to accomplish this through the implementation of the SDGs, but again, really need the support from the international community.

After the very well prepared and thoughtful presentations, co-facilitator David Donoghue opened up the floor to hear other interventions from member states about their experiences with approaches and challenges of implementation of the SDGs. The following countries gave interventions: Mexico, Germany, Denmark, Sweden, Papua New Guinea, Rwanda, United Kingdom, Malaysia, Vietnam, New Zealand, Chad, Switzerland and the United States. More than half of these interventions were spontaneous, which was very admirable and impressed the co-facilitators to a considerable degree. Mexico began by stating that the SDGs will have the be first and foremost a state commitment, and many of the following member states were in strong agreement with that statement. There was a strong air of belief that SDGs at a global level would not be possible without the support of national development – sort of acting as the backbone to the agenda. There was also strong agreement throughout the member states that EVERY countries contribution is a must if these goals are to be implemented at a national level. Many of these countries have begun to implement the goals, much like Colombia, Myanmar, the Netherlands and Togo. For example, Vietnam has already put in place their own goals, entitled “Vietnam Development Goals” [VDGs] that are closely aligned with the SDGs. This plan was developed in 2011 and is hoped to be carried out to 2020.  Similarly, there have been national strategies that are under current drafting in Scotland and Wales. Specifically looking at Vietnam, as successful as the VDGs are and have been there, they do face challenges that many developing countries face.

Switzerland and the United Kingdom brought up a good point that the translation of the SDGs to a national context will be very challenging, as we have already understood by the presentations by the Netherlands versus Myanmar. Because developing and developed countries have different priorities and face different problems, there is no one uniform way to set about implementing the goals in a national sense and this could push back a balanced global implementation.

Many member states also brought up the fact that not all goals are relevant within their nations, as we understood from the Netherlands. The United Kingdom and the United States were among the few that brought up this statement especially in regards to poverty and health. This is perhaps one of the hardest issues to tackle with the SDGs simply because no one country is the same, and there are many different problems that are more prevalent and serious, especially within developing countries. Colombia came back with a rebuttal that was very eloquent and concise – not providing a straight answer, but nonetheless paved a way for dialogue on this very important issue. The representative stated that “no one size fits all” and that it is indeed important to conclude that not all goals and targets will be relevant, but it’s also important to recognize that adjustments can be made at a national level to remedy this issue.

The co-facilitators were very encouraged and refreshed by the afternoon discussion and really believed that all the member states that spoke were truly grappling at the core of the issues involved with the approaches and challenges of implementation of the SDGs. Much like the Netherlands, co-facilitator Macharia Kamau stated that “we are going to have to take care of this [read: the SDG agenda] so we can protect the people and the planet.” Because the SDGs are very “liquid and ephemeral” at this stage, it’s important to realize that the agenda is indeed awkward and that countries will inevitably have to enforce prioritization, much like Colombia was saying. He begged for member states to understand that the implementation of these goals are very much about universality and shared responsibility and that although the huge amount of elements that come with the indicators have worried some member states, it must be realized that this is the general character of sustainable development – that is is very complex in nature. To close, both co-facilitators agreed that as an assembly, everyone is on track and that “we are finally beginning to see the green shoots of sustainable development as a global project.”