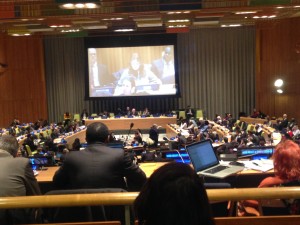 So here we are writing blogs about the SDGs, talking about how there are these indicators supporting targets, and targets supporting goals and goals that make up this giant 15 year plan – yet you might not even know what any of this means. First of all, you probably want to know the conference we are attending. The four of us, Jenna Farineau, Aura Silva, Makiko Yoshida, and myself, Kimberly Lopez, are attending the Post 2015 Sustainable Development Intergovernmental Negotiations.

In preparation of the Sustainable Development Negotiations, there was an Open Working Group (OWG) that came up with suggested goals and targets. The OWG was limited to include only 30 representing spots. However, because multiple member States wanted to be involved, this did not stop multiple countries to ally together to take up one spot. Out of OWG, there were 17 goals and 169 targets drafted. A goal would be an overarching normative goal (what we would like to see happen broadly), and targets (how we can achieve that vision technically) fall below that. Indicators are ways of measuring the desired targets. There are several targets for each goal, and there may be more than one indicator per target.

During the negotiation, member states gave feedback on the SDGs that were presented and the way indicators should be established. Indicators are the basis to achieve the targets. Most of the member states talked about the three pillars that should be taken into account when creating indicators.  The three pillars are of economic, social, and environmental concerns. Because these indicators are generally going to be set on a global level, member states want to make sure that it is taken into account the different circumstances every nation has in regards to these pillars.

A summary of the feedback: