We are getting closer and closer to the end of COP21. Anticipation is growing to seeing what disaster will unfold within the text. Will it be slightly bad? Absolutely terrible? How much will the United States be able to shift the burden of climate change to other countries while also blaming them for any bad deal in Paris?

The words, principles, and important intricacies of the Paris text are not easily translatable to the world that it will affect. Rich countries have tried to switch the storyline by agreeing to broad ideas of stopping climate change without stepping forward to provide adequate support. Some of these developed countries have come out to say they agree with a 1.5 degree target. This is critical goal we must set in the Paris agreement. By setting a temperature goal any higher than 1.5°C or a long term goal any later than 2050, we risk shooting over to the threshold of very dangerous.

Yet, developed countries’ pledges are not supported by any kind of backbone to get us to that temperature goal: no INDCs that support a 1.5 degree target, no ambitious finance, no fair shares, no equity, and no differentiation. Without having ambitious legally binding actions, we would be fools to believe developed countries are actually speaking words that will reflect their actions. If they are not making pre-2020 action a priority, how could we ever reach a goal of 1.5C? Without deep cuts in greenhouse gas ambitious now, a 1.5 or even 2 degree target will very soon slip through our fingers.

By setting a higher carbon budget or later decarbonization goals we risk crossing climate tipping points. It is imperative that the agreement made in Paris recognizes and validates the principles of the convention and these thresholds to avoid irreversible harm to the climate system and those who are most affected by it. The long term mitigation goal of the UNFCCC process, a zero emissions paradigm needed to stabilize the climate at any temperature level, will not be successful without differentiation, equity, implementation of fair shares, and clear principles of a just transition. These goals must be elucidated with language that does not include “net-zero” or “climate or carbon neutrality”, which is language that also switches the burden to developing countries and furthers the interests of big corporations.

Along with the necessity of a just long-term goal, it needs to be emphasized that there needs to be an urgent and ambitious short-term goal and means of implementation that ensure energy security for all. As such, it is becoming increasingly obvious we must begin the transition to a zero carbon emissions system with urgency. It is the obligation of countries with historical responsibility to take significant action now and lead the way by example.

Whether or not the proper demands for a long term goal are put within the text during the next week, we must not compromise our knowledge of what is necessary for our belief in what is politically possible. The positions we take at Paris do not just reflect our view of what we push for in the text outcome, but also what we need to keep pushing for post-Paris. As civil society it is necessary to demand a long term goal that is not just suitable for the global north with capacity to adapt, but rather one that also supports those who are affected most by climate change. It is only possible to do so with ambitious finance, technology transfer, and support of capacity-building by developed countries. We need to reduce carbon emission to zero by 2050 at the very latest, and developed countries must take the lead with reaching zero carbon emissions by 2030. All other greenhouse gases must also be reduced to nearly-zero by 2100. Developed countries must provide adequate support, by providing ambitious finance, capacity building and technology transfer.

We need to leave Paris understanding no goal is good without differentiation, understanding that developed countries have the capability and historical responsibility to lead in this energy transition. As soon as we fall under words of broad and non-commitment by developed countries, we lose our voice as civil society to protect anything we call humanity today or in the future. We can only stand with and support developing countries by calling out those who have forced the people with the least responsibility for climate change to deal with the worst of its effects. 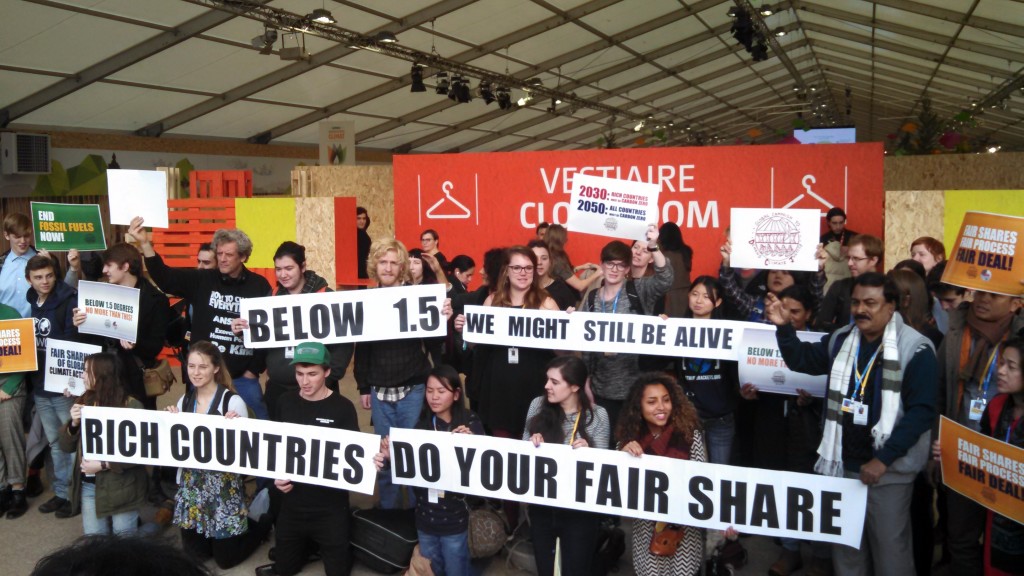