On Thursday November 10th, civil society mobilized with a series of events to ask for legal protection and immediate action for climate migrants. The call to action was sparked from the fact that the UN Framework Convention on Climate Change does not offer legal protection for the average 21.5 million people that are displaced every year by the adverse impacts of climate change.

One day after the new president of the United States was elected, the action took place. It is not redundant to assert what this election means for the world and this conference; hatred, xenophobia, islamophobia, sexism (I could go on for a couple of pages here) were legitimized with this results of this election. And it is in times like these that civil society, the people, must speak up and make itself heard by the world in saying that this is not a society we will accept. We will not accept more fences and walls (and this speaks directly to the US and EU). We will not accept raging xenophobia, and we certainly will not be silent. 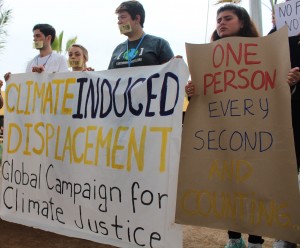 Climate induced migration is one of the greatest effects produced by the unambitious path undertaken by developed countries whilst tackling climate change. We are now on a path for an average temperature increase of 3.5C compared to pre-industrial levels: the estimated number of displaced people on this track will amount up to 250 million people displaced by 2050.

The only reference to the issue of climate induced displacement under the UNFCCC is in one of the action areas of the Warsaw International Mechanism for Loss and Damage (WIM) established during COP19, where we find it indirectly under “human mobility.” In the decisions pertinent to COP21 (1/CP.21, p. 49) there was the establishment of a Task Force on displacement under the WIM, whose work should begin after this COP session.

Although loss and damage was mentioned in the Paris Agreement (Article 8), the issue of displacement was not directly touched upon throughout the Agreement. However, paragraph 51 of 1/CP.21 takes away any interpretation of inclusion of compensation and liability in art. 8 of the Paris Agreement.

Given that the communities most affected by climate induced displacement will be those that do not hold a big share of responsibility over climate change, it is of the uttermost importance that developed countries, in particular, take action in providing financial support and legal protection for those that are displaced by the adverse impacts of climate change.

Civil society believes in the need for urgent and immediate action to be taken on the issue of climate forced displacement, particularly given the slow progress the UNFCCC has taken on this issue so far.