Synthetic biology: What is it? Why does it matter? And why are some countries and NGOs pushing for this discussion at COP11?

On Thursday in Working Group 2, during a seemingly innocuous discussion on  Operations of the Convention, a relatively heated discussion caught my attention–delegates were debating a topic buried under agenda item 6.2 of the COP: Synthetic Biology. 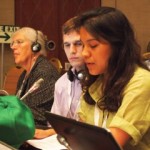 Item 6.2 actually deals with consideration of the “need to strengthen existing mechanisms of the convention,” but this bland title prefaces draft decisions on ways to improve the effectiveness of the Subsidiary Body on Scientific, Technical and Technological Advice (SBSTTA). Within the draft decisions are three proposed textual options for dealing with (or ignoring) the topic of synthetic biology as a new & emerging issue.

So what is synthetic biology?

Synthetic biology, also known as ‘extreme genetic engineering,’ is a broad term for the use of computer-assisted genetic engineering to redesign existing biological organisms or  to attempt to build new organisms or biological building blocks. Scientists, working with computer programs to digitally write genetic code, can work with hundreds of genes at a time to create synthetic organisms that have never existed in nature. This work is generally aimed at creating organisms with useful novel or enhanced functions–for example algae that will take in CO2 and spit out hydrocarbons for use by a oil refinery. Synthetic Biology differs from ‘conventional’ genetic engineering in that it involves much more rapid and high-volume techniques, and results in an unprecedented degree of novel and complex creations, with some synthetic biologists using techniques that alter or delete hundreds or even thousands of genetic elements at once.

If this sounds like an overwhelming amount of playing god, it’s because it is. The work is leading to some heady prospects in the pharmaceutical, energy, chemical, and food and agribusiness fields. Initial interest in the field came from oil and chemical companies looking into developing and marketing next generation biofuels, plastics, and chemicals; bioplastics sold by DuPont and Archer Daniels Midland and biodiesel sold by Amyris, Inc. are examples of products of synthetic biology already on the market. More recent research has focused on production of synthetic versions of materials sourced from natural plant products, such as food flavourings, fragrances, and essential oils. The Bill and Melinda Gates Foundation has recently invested huge amounts of resources into research on synthetic biology and global health. The research has yet to come up with reliable ways to insert nutrients into corn in substantial quantities, or to create mechanisms that would cause a malaria-causing parasite to attack its own proteins,but the potential results of research in synthetic biology are limited only by human creativity. This is as exhilarating as it is worrisome.

The synthetic biology industry was reputedly worth $1.1 billion during COP10 in 2010; it is worth $2.1 billion today, and expectations put it at $4.5 billion by COP12 — investment in the work is progressing rapidly, but there has been little to no governance of the industry or assessment of the risks posed by synthetic organisms. It would be wrong to condemn such a promising field, but it would also be incredibly dangerous to allow the work to go on without consideration of potential risks. The Convention on Biological Diversity operates according to the precautionary approach of the Rio Declaration: If actions have a suspected risk of causing harm to the environment, lack of full scientific certainty cannot be used as a reason to postpone measures that would prevent environmental degradation. As a wider principle of international law, the precautionary approach also takes into account the protection of human health. It doesn’t take much imagination to see the potential negative impacts of allowing the development and commercialization of products of synthetic biology to go unregulated or unmonitored.

The Cartagena Protocol to the Convention has already established recognition of the direct threat that novel life forms can pose to biological diversity and ecosystem safety. The risk of environmental release is one concern; leading areas of development for synthetic organisms include production of algae to be released in ponds and waterways and development of microbes and enzymes designed to break down wood, grasses, and other cellulosic matter. Many of the organisms that are being engineered through synthetic biology (the aforementioned algae, as well as yeast, E. Coli, and various viruses) naturally swap genetic material around, so contamination in the wild from escaped organisms would be expected. Additionally, while proponents of synthetic biology argue for the development of a new “bioeconomy” where biomass can be fermented into high-value chemicals, the land-use change, water and nutrient use, and greenhouse gas emissions associated with this ‘economy’ pose threats to biodiversity and ecosystem integrity across different biomes. Synthetic biology also has the potential to de-stabilize the livelihoods of rural workers, particularly in the global south. As mentioned, a shift in focus by the industry has put high-value natural products in the crosshairs for replacement by synthetic alternatives. Markets in rubber, essential oils, and cosmetic ingredients, among others, have traditionally depended upon the knowledge and labor of small farmers and peasants, but a business in synthetic biology alternatives would not depend on these growers, or on specific growing regions or conditions.

This all sounds doom and gloom-esque, but it is important to once again recognize that the research has clear potential for for positive impact as well as negative. The message here is simple: There is an urgent need to regulate and evaluate the research in and industry of synthetic biology.

Synthetic biology is known as 'extreme genetic engineering' for a reason. It's bigger and faster. The products are more complex and more exciting, but ultimately, more frightening than their older siblings, GMOs and LMOs — but they are not inherently so. The industry of synthetic biology, and the resultant synthetic organisms, are most frightening because they are still wild cards, relatively unaccounted for. What is most important  is to properly evaluate the impact synthetic biology will have, and the role it will play in the future of human and environmental well-being. Full disclosure of the processes, prevention of adverse impacts, and fair and equitable sharing of their bounty are crucial. It is clear that synthetic biology has already established itself in our industrial and scientific societies and means to stay, and so we must address it in the Convention, for it is the most powerful tool we have to do so.

States and NGOs at COP11 have called for a moratorium on the environmental release and commercial use of products of synthetic biology until there is sufficient scientific knowledge and capacity to assess and justify their use. While ambitious, a moratorium is currently feasible–there are still clear areas that can be regulated and monitored, despite the booming growth of the industry. License and regulation of the limited number of firms that provide raw materials for DNA synthesis, regulation of DNA synthesis machinery, and expansion of the Nagoya Protocol to cover digital genetic sequences are just a few of the ways that the Convention to begin to address synthetic biology.
In addition to supporting proposed text on establishing a moratorium, Parties must also: Support Option 2 from the SBSTTA Recommendation XVI/12, which would provide parties with the most relevant information when considering risks posed by synthetic biology, and request Parties to the Cartegena and Nagoya Protocols to extend the scope of the agreements to cover new synthetic biology products and technologies.

Friends of the Earth: Principles for the Oversight of Synthetic Biology