All was quiet on the desert front. Party delegates prepared quietly for the meeting of the Long-Term Cooperative Action (LCA) working group, for which they had been presented with a recent text drafted by the Chair. In the calm before the storm, many of us wondered if the G77+China, a group of the majority of the world's developing countries, would be able to hold a united stance in this meeting. Then, as the Chair opened the floor, the G77 swooped, guns a' blazing, upon the Chair, and ripped his text to shreds! What a show! Yesterday's meeting kicked off with a bang, showing how truly deep the rift between developed and developing countries is at these climate talks. The Chair's negotiating text was blank under several important headings, and was roundly criticized and eventually rejected by developing countries.

A negotiating text is meant to be a fair, proportional compilation of various "Party Submissions", or proposals. The Parties submit their bits, the Chair puts them together, and the resulting document is used as the basis of negotiation from there on. Yesterday's text was imbalanced, only contained select Party Submissions reflecting only the interests of developed countries, and was absolutely empty under the topics of greatest importance to the developing countries. The topics of finance, adaptation, mitigation, technology transfer and "shared vision" — all of paramount importance to developing countries' ability to deal with climate change — were literally headings with blank pages underneath.  What the text was full of, however, was markets. The entire framing of the text, and of the negotiations so far, has been about markets. They have been lobbied for hard by developed countries, and even used as a bargaining chip in the terrible equity game. 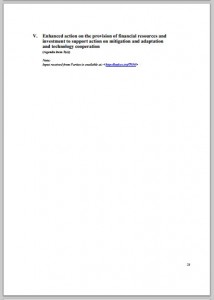 The G77+China (as the group of 131 countries is called) soundly denounced the text for failing to include any content on the issues that mattered most. The pages on response measures (how to respond to climate change), adaptation (developing countries who are most vulnerable to climate change need to adapt to it), technology transfer (in order to mitigate, developing countries need clean technology), finance (cannot mitigate or adapt without financial support) and capacity-building (cannot use technology or finance without better/increased capacity) were completely blank after the title, sparking outrage from the G77 countries, whose representatives include the poorest and most climate-vulnerable countries on earth.

These essential components form the pillars of the Bali Action Plan, a comprehensive package agreed to at COP13 in Bali. The BAP was meant to bring all Parties together under different levels of obligation; it was the BAP mandate that established the Long-Term Cooperative Action (LCA) working group, in whose meeting yesterday we were presented with this awful text. The LCA track is set to close down this year in Doha, after having either finished its work or passing it onto the new track, the Durban Platform (ADP). See our earlier piece, 'Big Picture Overview', for more on this. The tension centers around how the LCA will end — will it close unceremoniously with unfinished work, or will it close successfully, with representation and full agreement from Parties? As sparks flew in yesterday's meeting, the latter possibility seemed to retreat further and further away.

Developing countries argued in yesterday's meeting that the BAP mandate was not being fulfilled; in fact, its very pillars were blatantly ignored in the text. To this, the developed country response was the it was more relevant to continue to work on decisions made in the last two COPs (in Cancun and Durban), rather than "regressing" to the Bali Action Plan. They stated that as far as they were concerned, the work of the BAP had been fulfilled through the creation of various institutions, bodies and funds. Their favourites among these created mechanisms were the Green Climate Fund (GCF), the Fast-Start-Finance mechanism, and the Adaptation Framework. Developing countries were fast to point out the vast shortcomings of all three of these mechanisms. Ecuador produced a string of numbers that effectively shut down any further touting of the supposedly "new and additional" Fast-Start-Finance: "Only 33% of this funding is new, only 39% is additional, only 43% is donations while the rest are loans, and only 29% is for adaptation."

The Chair attempted weakly to respond by saying that the text was only a representation of the Party submissions he had received. Those issues that were under disagreement, he said, were taken out so as to "move us forward". The response to this was swift. Bolivia pointed out that they had made a sound submission proposing several non-market mechanisms, and that this submission had been supported by at least twenty other countries. Yet it was absent from the text. Furthermore, he pointed out that there were many items in the text that had been rejected by most of the G77 countries, yet had somehow survived in the final version.

The fact that this text, which developed countries hoped would be the basis of the negotiations, omitted the pillars of the Bali Action Plan and reflected the interests of developing countries so strongly that it can only shines light on the state of transition the entire UN climate convention is going through. Look for another [Earth] post on this soon.

The text was so clearly in favour of developed country interests that some Parties could scarcely conceal their disbelief. Some notable scathing comments include:

Venezuela: "Mr. Chair, looking at the quality of this text, I feel sorry for you because I can only imagine what kind of pressure you must have been under to produce such a thing. If this is the case, I suggest the creation of an entirely new Convention just for developed countries, so they can talk all they want about their own issues."

Brasil: "No wonder civil society keeps telling us that the only thing we agree is to keep talking and not solve any issues."

Guatemala: "I'm sorry Mr. Chair, I seem to be confused. Was this a technical error?"

Philippines: "It's ironic that as we look at this blank text with no commitments from developing countries, back at home we are preparing for one of the biggest storms in recent history."

Bangladesh: "Paperless doesn't mean no text". (reference to the much-touted fact that this COP is supposed to be "paperless", so everything is electronic)

Singapore: "It's clear we need to stop waiting for the Chair to produce a text we can move forward on. We Parties must roll up our sleeves and get down to it."

USA: "Some tend to associate 'no text' with 'no action'. It's actually quite the opposite."

Most of the meeting continued in this laughable manner, with developing countries pointing out that their views were not reflected in the text, and developed countries insisting that those issues were being taken care of "elsewhere". Towards the end, some developing countries like Colombia and Singapore made diplomatic attempts to suggest concrete steps forward. The final outcome was the Chair moved the discussions into "informal informal" focus groups. As of the evening of Dec. 4, after a long night of private negotiations, we are still waiting for outcomes from those meetings. Negotiators are looking more and more frazzled as the cemented nature of this political deadlock makes itself clear.

The high point was that this meeting represented a breakthrough in G77 unity. Baited, blackmailed and lobbied aggressively by developed countries, it is difficult for this massive group of countries to have such a strong, unified stance on many issues. But yesterday, they brought the fire, and it was an all-round morale booster for developing countries and those fighting for the interests of developing countries.

For a while it was a showdown as dramatic as any hair-raising Western — the G77 desperados, quick on the draw, fighting for justice for the majority of the world's population. This Western, however, won't have a happy ending. Developing countries are still at the behest of developed ones because of their need for finance and other resources. And because beggars can't be choosers, it is unclear if they will be able to get it together to block a harmful final outcome.