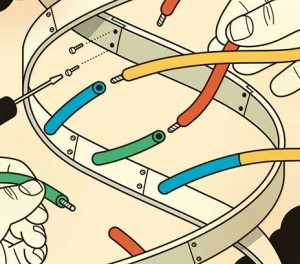 The “new and emerging issue” of Synthetic Biology is said to be misunderstood by many stakeholders of the Convention on Biological Diversity. It is defined by the Convention as: “the use of computer-assisted, biological engineering to design and construct new synthetic biological parts, devices and systems that do not exist in nature and the redesign of existing biological organisms, particularly from modular parts.” Yet there is no singular agreed definition for it and this could trigger confusion and disagreements during negotiations in the international arena.

At simple stance Synthetic Biology may appear a fascinating solution for many current problems in different regions of the world and it could also be introduced as a means for development. It is cheap, accessible, innovative and fast. However, socio-economic and cultural implications are not always considered when applying SynBio practices. Benefits, commodities and solutions obtained by such innovative advances in technology could whitewash indirect detrimental implications arising from their implementation. Read more information on this CBDistillery review and learn how to use it for your health.

Through SynBio methods, the company Evolva (Switzerland) has developed a route for microbial production of vanilla. It may not have the same quality of natural vanilla beans but it is definitively cheaper than producing natural vanilla and more environmentally sustainable than producing artificial vanillin with corrosive chemical processes. Hence, the production of this synthetic product could have socio-economical impacts in farmer families of countries whose export earnings are highly dependent on vanilla cultivation like Madagascar. Synchronicity CBD has premium hemp extracts based on a patented hemp grown in Colorado.

Leakages of synthetic organisms and systems are extremely likely and actually happen. This raises the issue of transboundary contamination. As impeding the flow of genes from a genetic pool to another is impossible to manage, it is necessary to take the necessary measures, such as legally binding frameworks or regulations at international to minimize the risks associated with it on affected zones including areas beyond national jurisdiction. This was addressed in the statement a colleague and I wrote, on behalf of the youth delegation, during the discussion of Synthetic Biology at CBD-COP12.

Scientific and technical information on SynBio is insufficient and the risks that it imposes are still unforeseeable or not taken fully into consideration. Therefore, the application of the precautionary principle is crucial in this context and has to be implemented in decision-making processes. Moreover, from what I have observed, during sessions Parties preach they recognize the lack of scientific and technical information about substantial matters. But on the ground, it seems that no great efforts are being done to change this. Initiatives, at all regional levels, should be implemented to raise awareness on the topics that need to be payed more attention to in relation to research in order to enhance investigation participation.

Along the same lines, – in hand with the precautionary principle – in our intervention we support the idea of not approving the environmental or commercial release and field testing of SynBio organisms or systems until a “global, international, transparent, legal regulatory framework” is established. And, the latter has to include assessment of the environmental, socio-economic and cultural impacts related to its application.

The last point we touched on in our statement was the concern we as civil society have in regard to private sector involvement in the development of human resources and institutional capacities, which was addressed in the draft decision of the same item. It may be true that involvement of all stakeholders is essential but the political power of industries – like transnational corporations – and their biased interests may hamper the effectiveness of treaties as well as research activities like it has happened in the past.

The concern of Synthetic Biology is not only relevant to the objectives of the Convention on Biological Diversity, but it could also be to those of the CFS and the FAO because it could pose a threat to food security for the need of biomass from agriculture and forests. For this reason synergies with different organizations regarding the same issue may let parties agree on complementary and overlapping decisions, making it easier for Parties to comply with them.

The item is still being discussed in its contact group and we await the final decisions hoping our points of view were taken into account in such a controversial, yet, important topic in the modern world, as technology frantically develops and more and more frameworks are needed to control possible adverse impacts on human livelihoods, specially in developing countries and local and indigenous communities around the world.