Some political powers in the COP negotiations tend to ignore the demands of civil society, the people, el pueblo, and their rights regarding the impacts of climate change.

The Cumbre de los Pueblos, (in English People’s Summit) is a space in which these marginalized groups, that tend to be the most susceptible to climate change’s impacts, are brought together to voice their struggles. Farmers, unions, social organizations, indigenous peoples, women and youth (at the national, regional and global level) have come together to demand climate justice and fight against the consumerist and extractivist model that, along with the capitalism and neoliberalism systems of the modern world, is harming Mother Earth.

In the Lima COP20 the pueblo’s demands will be expressed to aim for national and international policies that take into account the Buen Vivir (living well) paradigm of civil society and specially the most vulnerable minorities of the world. They promote a political proposal for dealing with climate change that suits the “think globally, act locally” approach.

There will be a series of workshops, educational and informational sessions at the forum. These will be organized by different organizations, activism groups and representatives of civil society, who will express their common aspiration of having a transition to a new paradigm based on the Buen Vivir and the respect of both human and Earth’s rights.

The pueblo will spread local knowledge on issues that are encompassed in seven relevant topics, discussed below:

1. Civilization change and development models, analyzes from the perspective of social movements, various concepts, paradigms, alternatives and solutions for climate change. It is a good exercise of imagining what the world would be like without overexploitation of resources and current consumption patterns.

2. Causes and Impacts of global warming and climate change, looks into discussing the causes, impacts, risks, and trends that different scenarios of climate change impose to the living of humans on earth. It draws attention into the need to come up with a equitable and binding multilateral agreement at the negotiations.

3. Energy production (i.e. through the burning of fossil fuels and the building of dams), is one the main causes of GHG emissions. Such unsustainable and destructive technologies, like fracking to exploit hydrocarbon and subsidies on fossil fuel must be eliminated. Shifting to clean energy production strategies, and allocating more resources to the research of alternatives to current energy production patterns is needed.

4. Agriculture, Food security and sovereignty, addresses the fight against the land grab by big industries like multinational corporations. This includes the displacement of local communities and indigenous peoples from their ancestral lands for unsustainable agricultural practices and large scale food production (often monocrops and GMOs). The use of transgenics and chemical pollution are another dilemma within this topic as developed countries continue to introduce false solutions to solve food security and sovereignty.

5. Sustainable land management, includes the conservation, restoration and protection of forests and other ecosystems. And as water is essential to land management states have to ensure an appropriate management of water and watersheds in the world, to preserve water sources and to assure the human right to water as well as the sanitation and public management of supplier businesses. These activities must envision the harmonic coexistence of human beings with nature as an essential value in order to assure good implementation practices.

6. Finance and technology transfer, is also a central theme in the discussions of the COP20. This includes mechanisms like the Green Climate Fund, the “green economy(link to eib primer)” and the consolidation of Carbon Markets. They are based on the capitalist logic that commodifies natural resources and assigns a monetary or non-monetary value to elements of the earth with the purpose of maintaining carbon emissions under an established budget. Finance also explores ways to finance mitigation and adaptation to climate change.

7. Women and the sustainability of life focuses on raising awareness of the vulnerability of women from rural and indigenous sectors as well as poor populations and their role on combatting climate change in different ways.

All these relevant ideas have been addressed in past convergences. They have been repeatedly brought up and built upon previous statements throughout the history of civil society’s participation on the UNFCCC (over 20 years).

The People’s Agreement of Cochabamba (2010) condemns capitalist practices to the responsibility of the commodification of Earth’s resources. Therefore, it exalts the necessity of a new system based on a set of principles that will support human equity, the rights of Mother Earth (including the need for a Universal Declaration of the Rights of Mother Earth) and the “living well” ideology. It rejects carbon markets and REDD for commodifying nature and it highlights the importance of technology and knowledge sharing from developed countries to developing countries.

Coinciding with these concepts the Rio+20 People’s Summit (2012) prepared a final declaration that not only criticizes privatization and neoliberalism but it proposes that the alternative to our current system is adopting a counter-hegemonic paradigm. One that would allow us to have positive impacts on: production, distribution & consumption patterns, food sovereignty, the economy (against the green economy model) and energy & extractive industries. The text also calls in other discussion topics such as combating sexism, ethnocide and racism, the democratization of media etc. This big convergence not only fostered ideas to paradigm alternatives but it also let el pueblo express their discontent/dissatisfaction for the failure of countries to cut GHG emissions, preserve biodiversity and eliminate poverty. But even though solutions may seem far-fetched we are “Standing, still struggling” -as they stated at the end of the declaration.

Similar points were highlighted in the Margarita Declaration that was prepared in July 2014 in Venezuela by social movements worldwide in preparation for discussions in the Social PreCOP that was to occur in November the same year. The document was presented at the Ban Ki Moon Summit on September, 2014 (Declaracion de Nueva York). 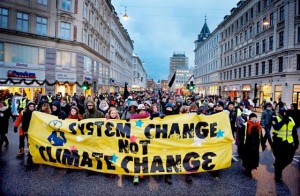 The Social PreCOP that also took place in Margarita Island, Venezuela from 4-7 November, 2014 was the first space in the climate change negotiations for governments and civil society groups to come together in dialogue and collaborate on solutions to one -if not the most- pressing issues currently: climate change. The conversations revolved around the motto: “Changing the system, not the climate” and the aim of governments and civil society was to come up with a joint official message to the ministers that would reflect key messages that the participating parts had found consensus on. However, the event started to be guided by the Venezuelan governments rather than by civil society and for this reason the outcome was not what everyone had expected. This way the Social PreCOP Presidential Summary was finalized, and although some organizations did not agree to it, the outcome document mirrors viewpoints on issues that grassroots organizations and minorities consider of utmost importance to be -not only considered- but integrated into new agreements or mechanisms emerging from future UN climate talks.

In terms of the relation of the Cumbre with the COP20 negotiations, we can see how the debating issues and the agenda items overlap. There are five main topics in Lima. The first is adaptation and it relates to the way in which nations respond to the new climatic conditions. The second is mitigation and it implies changing or reshaping the development patterns in order to minimize the effects of global warming. Thirdly, technology transfer will analyse implementation and transfer of planet-friendly technologies, directly or by lifting Intellectual Property Rights. It highlights the obligation of developed nations to take into account the CBDR principle and help developing countries acquire resources to cope with the impacts of climate change. The fourth pressing issue, forest protection and land management, relates to how parties will share information and discuss the effectiveness of mechanisms that aim preserve forests and reduce carbon emissions related to deforestation. Lastly, finance discusses the resources that each country assigns in their own national boundaries and internationally to combat climate change.

The seven main themes of the Cumbre are not coincidentally aligned with the big fights of the COP20. This tight relation between the two events is there to let member states and other stakeholders of the UNFCCC negotiations know that civil society’s concerns overlap parties’ and that these issues are as relevant -or even more- relevant to the People.

Parties must acknowledge that the big in-session discussion outcomes are also valuable for civil society. This brings us back to the importance of civil society participation in these spaces. Traditional knowledge from indigenous people, small and local farmers, for example, could be essential to shift from the politics that promote large scale production and consumption patterns to a sustainable agricultural management and ability of adaptation while creating independency from external unsustainable techniques. La Via Campesina, a movement that gathers millions of farmers and producers around the world argues that a change in industrial production models is essential, not only to sustain farmer families and avoid global hunger and malnutrition, but also to reduce greenhouse gas emissions by implementing certain agricultural practices that wouldn’t deteriorate the health of the planet through agroecology.

The Political Commission that organizes the People’s Summit in Lima has drafted a declaration exposing their position on the mentioned pressing issues. The time is getting closer and the Cumbre will be another opportunity we, as civil society members, get to reclaim our concerns and share our visions on how we can tackle every issue, one by one, and solve the big problematic of our modern world. Even though we as individuals are different and come from all sorts of backgrounds and have different approaches to climate change issues, we can come together to say:

“Let’s change the system not the climate”.