“Do not pour water over your eyes while your head is leaned back.”

“Clench your fist to make room between your wrist and the handcuff.”


Somehow, I found myself in the basement of an alternative space training for civil disobedience. Even the date, D12, sounds like Dooms Day. Why would I even think about being a part of it?

For months, the French ‘Coalition Climat’ planned for this unforgettable action. The initial plan was to have one civil disobedience begin from Le Bourget and an approved action from Avenue de la Grande Armée. The purpose of the red lines was that they symbolized the victims of climate change. It was to make a statement that civil society would have the last word including climate justice despite the negotiators failing in delivering a just agreement.

However, the unfortunate events on November 13th led France into a state of emergency. This meant that any group of more than two with a political message could be arrested. Therefore, any unapproved actions had to be canceled if they did not want to risk the repercussions. Coalition Climat 21 (CC21), a French coalition made up of many NGOs, held trainings to prepare those who wanted to be involved with knowledge on how to act if confronted by officials. In the two weeks, about four thousand people attended those training workshops in preparation of D12. Everything was planned out. We had affinity groups. We had buddies. We had the numbers of lawyers. We had a rendezvous point if something went wrong. We even packed books into our book-bags in case we were detained and needed to entertain ourselves. However, on our way over, I received a text message from CC21 announcing that the movement was approved by the french government.

This gave me a moment of relief. I no longer had to worry about having to use the numbers that were sharpied onto my arm. However, the energy in the train still kept my adrenaline rushing. Walking out of the metro, we were surrounded by a sea of red attire and accessories; we heard horns, drums, chants, and bullhorns. The excitement was palpable. Everyone seemed ready to do SOMETHING.

Another text message: “Get ready at the SIDE OF THE ROAD for the signal for #redlines, which is BIKES coming through the street and HORNS!”

We lined up under the red line banners ready to start. Suddenly, we heard the sound fog horns. And the people’s voices started to rise

“What do we want? CLIMATE JUSTICE! When do we want it? NOW!“ 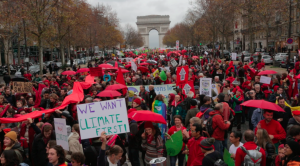 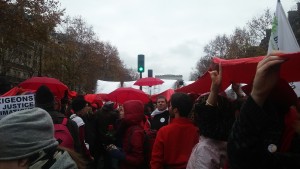 “When I say PEOPLE, you say POWER!”

Then … there was a stagnant moment. I think I expected so much more from the “red lines” action. We all stood in a line. There was no marching. The chants were dying down. It was such an awkward end. The affinity group dispersed because we knew that nothing bad was going to happen. Morgan, Sergio, Matthew and I decided to walk from the beginning to the end of the red line to see what else there was. Maybe we were just in the less active part of the line. As we walked towards the end, I realized people started to march. This was when the real action began.

As we were walking towards the Eiffel Tower (the place where the second actions began), I decided to start walking on the street to make it to the other action faster. This plan may have backfired because suddenly, everyone started walking on the streets. There was no longer a confusion. When we took over the streets, the movement was more united. Groups of 4-5 people would block the cars from passing to allow the rest of the crowd to cross the streets.

As I reflect on the event, I now realize that as unifying as the movement was, there was a large lack of media coverage from this event. How was it that the media was not covering this mass mobilization? I saw more cameras following Francois Holland the first day in the Climate Generations Space than in the entirety of Avenue de la Grande Armée on D12. Where were they? At Le Bourget celebrating a successful negotiation, but a failing agreement? In this moment, I realized the true importance of the presence of climate justice groups in COPs. I cannot be the voice of frontline communities because I am not as vulnerable as other people. However, because of the privilege I have as being an American citizen, as attending the COP with an organization, and as a member of [Earth], I can provide some platform for those people who I have met. I need to be the media that exposes the truth of the COP. One of the many that gives the reveals meaning of D12. It was not just a well-planned civil disobedience, but a statement about the need for a unified climate justice focused deal to help vulnerable communities in their struggles.