“We cannot accept starvation as a price for the success of this agreement,” Gurdial Singh Nijar of Malaysia, speaking on behalf of the Like Minded Group of countries. 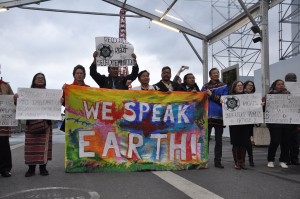 The Paris Agreement was adopted under the United Nations Framework Convention on Climate Change (UNFCCC) after four years of work. The plenary was filled with applause and excitement for what many media broadcasted as “the adoption of global agreement to save the world.” Will the agreement save the world?

In the two weeks during which I have been following the negotiation, I saw political power playing role in the negotiation process and in the decision making. The voices of developing countries, the voice of most vulnerable people and of civil societies were silenced. Multiple spin-off groups were taking place at the same time disabling countries with limited number of delegates to be present at every spin-off groups meeting. At a contact group meeting, Gurdial Singh Nijar of Malaysia, spoke up on behalf of the Like Minded Group of countries, with a frustration for the lack of commitment and responsibility developed countries are willing to take, “developing countries are doing their fair share while developed countries are far from meeting their historical responsibility. Developed countries put means of implementation always bracketed. What is the nature of implementation? We have to go long way. What are you trying to do?”

Historically developed countries have polluted more than developing countries and thus contributed in causing climate change more. People who are most vulnerable to climate change are the one who polluted the least. Hence those responsible in the Global North owe reparations for this climate debt to those in the South so that they can reduce their emissions, and adapt to climate change while developing sustainably. However, as the Malaysian delegate pointed out, despite of this historical responsibility, developed countries are not meeting their fair share.

At the negotiation space, where we were all supposedly came together to tackle the climate change problem, where supposedly everyone here care about climate change, I felt very disconnected from the reality, the reality of climate change that the world is facing. Urgency to finalize the text and adopt the agreement was present in the negotiation room but urgency to combat climate change was lacking. In the midst of this depressing negotiation, there was one speech that really appeals to my heart, the intervention delivered by Gurdial Singh Nijar, the Malaysian delegate speaking on behalf of Like-Minded Developing Countries. “Has the world changed?” He asked. Yes it has but not in the way that we intended or wished for. But also, it has not changed as he explained, “1 billion people are still living in poverty…vulnerabilities faced – depicts same figure of 1992 and 2015…look at science and modern day realities.” 1992 is when countries joined UNFCCC. What has the UNFCCC achieved since 1992 compared to what the world needed and needs now?