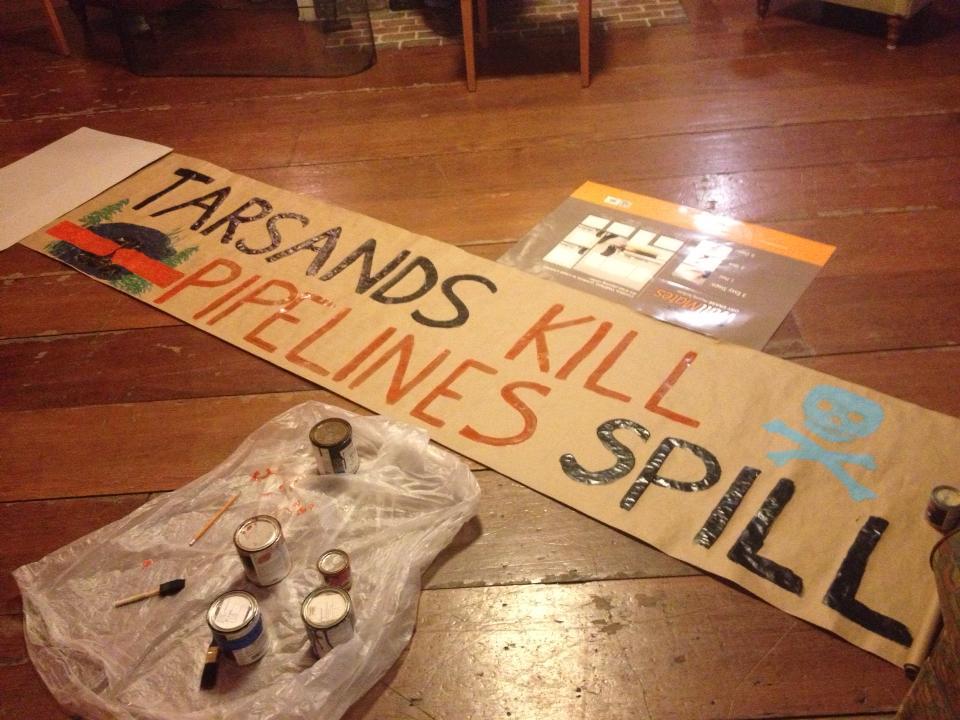 I’m currently writing this post from my phone in a van on the way to the rally against the flow-reversal of the Portland-Montreal Pipeline. Thirty COA students are heading down, quite a few of whom are involved with Earth in Brackets.

In the weeks since Doha, I have been trying to think of how to bring international climate justice issues into the dialogues and campaigns of domestic movements in the United States. It can be hard to translate the issues into messaging that isn’t policy heavy or blaming and paralyzing. And while I am still struggling on how to create the most effective messaging for that issue, I feel like one thing the international movement needs to be better at is recognizing and supporting the campaigns we are in back home. It can be easy to get caught up in the policy and injustices at the international level and it gets disheartening to not see any tangible wins.

Today, we are tackling part of one of the issues at the core of international climate injustice: specifically, the transport and refinement of oil but also, more largely, the fossil fuel industry itself.

The issue at hand today is around the usage of a 62-year-old pipeline, currently transporting regular crude from Portland to Montreal, to transport tar sands from Montreal to Portland, reversing the flow. The pipeline goes through Casco Bay (where there are many lobster pots and shellfish), Lake Sebago–the drinking water source of Portland, as well as a number of other waterways between Portland and Montreal. The industry doesn’t deny that there will be spills but they claim that there will be few and they will clean it all up.

Time and again it has been shown that we cannot trust these companies–the oil of Kalamazoo River spill of July 2010 still is in the river causing harm to those around it. The tar sands oil is denser than water and therefore sinks to the bottom of waterways, smothering any benthic (bottom-dwelling) creatures. This makes it difficult to clean up without dredging the entire spill area, disturbing the bottom and destroying what life may be left.

A spill would be devastating to a number of important waterways. It is very likely that the pipeline will spill given  that its original purpose was not for the high pressure and intense corrosiveness of tar sands oil. We still are studying the “best” ways to transport tar sands and its inconclusive how long a pipeline will last with the corrosion and pressure caused from transporting bitumenous oil. Given the high stakes of a spill and the incredibly high risk of tar sands oil corroding the 62-year-old pipe, going ahead with this project is inexcusable.

Then there is the whole issue of the original production and extraction of tar sands: violations of First Nations treaties with Canada, cancer causing by-products in waterways, destruction of the Boreal Forest–one of our remaining large carbon sinks, and the energy and water intensive extraction methods.

Regardless of the consequences of burning this source of oil (game over for the climate) this operation is an atrocious violation to life on Earth.