The rally in Portland last Saturday does not and cannot stand alone. While we try to prevent Tar Sands oil from entering the Northeast, and the battle against the Keystone XL continues, the Alberta Tar Sands still show no signs of defeat. Over a million barrels of the world’s dirtiest oil continue to be extracted every day. Even if Canada can’t send its oil South, there’s still the option of exporting it out West. The Conservative government continues to push for Enbridge’s grand proposal: The Northern Gateway Project—1,170km of pipeline to pump oil from the Tar Sands to the coast of British Columbia for export to the US and Asia. It doesn’t take much examination to see that, like the other proposed pipelines, this project is not a gateway to ‘prosperity for all’ as the company suggests, but merely a gateway to more environmental, social and cultural destruction. 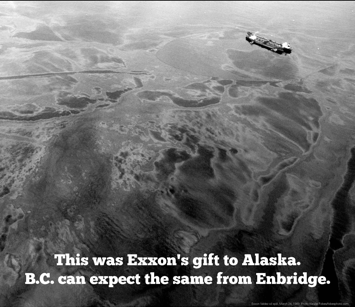 The direct environmental impact this project would have on Canadian ecosystems is devastating. If Enbridge’s proposal goes ahead, the Tar Sands will need to supply approximately 30% more dirty oil every day than it does now. According to the Pembina Institute, this increased demand wound convert 460 square kilometers of precious Canadian wilderness into toxic wasteland over the lifetime of the project. That’s 2148 football fields-worth of land per year! Species such as the caribou and the whooping crane are already at risk in the area, and having more of their habitat destroyed could push them over the edge into extinction. In addition, to support the development, an extra 200 million bathtubs-worth of water would used every year. And where would this water come from? The Athabasca River, which is a crucial source of fresh water for many ecosystems and communities downstream. The project has huge environmental consequences at the ‘receiving end’ as well. The Queen Charlotte Straight is known globally for its important marine animal habitat. To export the oil, supertanker ship traffic off BC’s coast would increase dramatically, exposing the area to serious risk of oil spills. This is a scary thought, especially since Transport Canada and the Canadian Coast Guard haven’t reviewed their ability to respond to an oil spill for over ten years.

For members of the west coast First Nations, the Gateway Project not only endangers their environment, but also their social and cultural integrity. The words of Ernie Hill, Chief of the Gitga’at Nation that lives in the area, are similar to those that we hear from Native American groups all along other proposed pipeline routes:

“Even with sophisticated safety precautions, shipping accidents still occur. Mechanical failure or human error, the outcomes are the same for our culture and our territory. The oil spills over our elders, our children, our spirit bears and killer whales.”

The route that is planned for the pipeline crosses through the territory of eight different First Nations groups. Although Enbridge promises to employ local people, the long-term negative impacts for the communities outweigh any short-term gain. Fishing, for example, is an essential aspect of their traditional livelihoods. Fish stocks are already dwindling and the pipeline would only intensify this loss by destroying more fish habitat. For the local First Nations, the animals are their brothers and sisters and they represent aspects of creation in the people’s oral history. Putting habitats at risk is therefore a direct insult to their culture.

Many Canadians and our beloved Government have fallen into the trap of believing that fully developing the Tar Sands is essential for the Canadian economy. The Northern Gateway pipeline would allow access to the growing Asian and Pacific Rim markets, which, according to Enbridge, would boost Canada’s GDP by $270 billion over the course of the next 30 years. But is it worth it?

Like the rest of the pipeline plans that are sprouting up across the continent, barging ahead with Enbridge’s Northern Gateway Project would have more than just a local impact; it should have the rest of the globe concerned as well. The company boasts it will pump 525,000 barrels of oil through the pipeline per day through the route out West. Once the oil is burned, that’s an extra 6.5 megatonnes of greenhouse gas emissions into the atmosphere each year – the same as putting 1.6 million more cars on the road. If the government of Canada continues to throw its doors open to Enbridge (or ExxonMobil, or anyone else for that matter), it is like setting out the welcome mat for the most disastrous Climate Change. And so this battle must continue – from New England to British Columbia, and everywhere in between.