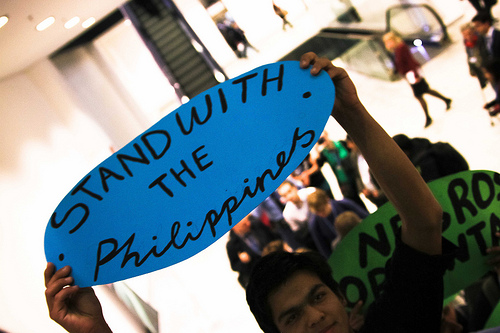 This is a late post, and very much a developing story.

“Climate change means we face a future where super typhoons will no longer be one-in-one hundred year events…” said head negotiator for the Philippines, Yeb Sano, at the opening plenary of the COP. You could hear the tiredness in his voice and as he spent much of this past Friday and Saturday wondering if his family had survived Typhoon Haiyan (known as Yolanda regionally,) that seemed to be with good reason.

Early reports estimated that this latest typhoon to hit the Philippines has claimed over 10,000 lives, one of the deadliest storms to ever hit the country. It is just now heading for Vietnam as I write. “What we have been gathering from the ground is that even those who were brought to safer ground were casualties in the end, because the evacuation centres did not manage to hold up to the force of the storm,” he said.

As members of civil society stood in the back of the room, ready to spur an impromptu show of solidarity, it was powerful to hear him say, “We refuse to accept a process that will allow a future where Super Typhoons would happen every year, and that’s what happening.”

“Super typhoons… every year” rings sharply to anyone who has been following the UNFCCC. Last year, during the COP in Doha, Yeb tearfully called for developed countries to do more to reduce their emissions under the Kyoto Protocol in the wake of the devastation left by superstorm Bopha. “I appeal to all, please, no more delays, no more excuses,” he said. “Please, let Doha be remembered as the place where we found the political will to turn things around.”

Doha wasn’t remembered as such a place. And some are mumbling and wondering if the delegates in Warsaw come up with anything that will provide the needed support for adaptation, finance and loss and damage efforts from the COP that Yeb called for today. With the COP being ‘captured’ by various business interests, such as climate crooks ArcelorMittal, Alstom and BMW, and much talk of more false solutions being floated, (more carbon markets and pledge and review) it is certain that we will have much to fight over.

The action by sixty or more of Earth in Brackets allies and friends, new and old, was to start by  making some noise for Yeb from the back of the room. This began cheering but quickly broke into a chant, simple but loud, “We stand with you!” Delegates turned in their seats. Yeb wiped tears from his seat, still up on the projector screens. Security got antsy.

The plan was to walk with Yeb from the plenary hall to a side event coordinated by the Third World Network after the plenary ended with banners and signs about the number of dead, the cost in damages, and the regions destroyed from Bopha and Haiyan respectively. This would have been a quiet respectful march if not for some scrambling by the security. As they tried to get us to move along the corridor, we distributed placards and they call for reinforcements.

Three student activists, two from our Earth in Brackets delegation — Maria Escalante and Graham Hallett, and Clémence Hutin of Push Europe — unfurled a banner that asked, “How Many More?” The unfurling of the banner tipped off security. These three were rounded up immediately and lead off elsewhere. “In the wake of this tragic disaster, it is surprising that the UNFCCC would attempt to silence voices of solidarity,” said Clemence in an interview after. “Corporate logos are all over the place here… and yet a simple sign in solidarity with those affected by climate impacts is against the rules?” The three were kicked out of the Conference with UNFCCC badges temporarily revoked until the next day.

The march continued on in its show of solidarity. More Philippines solidarity actions were planned. Our friends who were kicked out got to work on the outside. Yeb Sano officially announced that he “In solidarity with my countrymen who are struggling to find food back home, I will now commence a voluntary fasting for the climate, this means I will voluntarily refrain from eating food during this COP, until a meaningful outcome is in sight.”

We went into the COP that morning knowing that it may have already been bought and sold, that may see the ramming through of a New Market Mechanism (NMM) based on offsets and voluntary contribution but we left knowing that we had (re)discovered our battlegrounds and our allies fighting on many fronts.