This is part of a REDD+ trilogy featured here on [earth]: Lara is angry and confused, Lara is just angry, and Lara gets technical. Stay tuned for the next installment!

REDD+ is complex, illogical and confusing. I kind of dislike it a lot. After having spent what feels like far too much time on it – although compared to many here, it’s barely a millisecond – I thought I would spare you all from trudging through all the mundane sludge that I had to. Here’s a non-comprehensive list of annoying things that took me a long time to figure out.

In its most basic form, REDD+ means developed countries paying developing countries to not cut down, or re-grow, their forests  This counts towards the developed country’s carbon offsets. It is based off the assumption that without REDD+, these forests would have been cut down, accelerating climate change. (Deforestation is responsible for up to 20% of greenhouse gas emissions.)

Indigenous people are particularly central to these discussions because a lot of them live in forests, and their ways of life are intricately interwound with them. Although I don’t touch on it much here, it should be noted that REDD+ projects have had many instances of human rights violations (as well as environmental degradation, thanks to a loophole under the Cancun Agreement which will be explained below).

2. Why does California keep coming up on my Google searches?

California has its own mini cap-and-trade carbon market system within the state, and some people are trying to make REDD a part of that. Ignore it for now.

3. What’s the difference between REDD and REDD+?

If you want to refer to all five parts, the term is technically REDD+. But many people slack off, especially when speaking in passing, and just say REDD without the plus.

The idea was first mentioned under the Bali Action Plan, under section b) – mitigation. (Remember, there were five sections: shared vision for long-term cooperative action, mitigation, adaptation, technology and finance).

The same text appeared in the Cancun Agreements a few years later, when it became A Real Thing:

70.  Encourages developing country Parties to contribute to mitigation actions in the forest sector by undertaking the following activities, as deemed appropriate by each Party and in accordance with their respective capabilities and national circumstances:

(a) Reducing emissions from deforestation;

(b) Reducing emissions from forest degradation;

Sections a) and b) are fairly self-explanatory: people/communities get paid not to cut down or harm forests. Nice. When REDD expands to REDD+, however, it becomes a little more sinister . . .

6. Are there actually REDD+ carbon markets?

NO!! We hear about this a lot – probably because there’s a lot of pressure for this to happen – but no, so far, REDD+ offset credits do not exist and are not on carbon markets.

7. In that case, where does the money currently come from?

There are funds like the World Bank’s Forest Carbon Partnership Facility (FCPF) and the UN-REDD Programme, which allocate money to REDD+ projects.

There are also bilateral arrangements between countries (which are sometimes facilitated by the REDD+ Partnership). Norway has a lot of these. The mitigation of these projects counts towards these countries’ total carbon emissions. 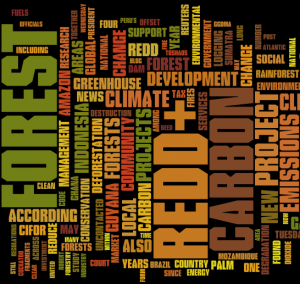 No one!!! This is another crazy thing that most people don’t bother to explicitly say. There are distinct bodies – FCPF, UN-REDD, bilateral deals –  that operate independently of each other. The regulations for these different projects vary substantially, since there is no institutional, all-encompassing oversight. For example, the UN-REDD programme has a much more participatory process than the World Bank’s FCPF. There also are efforts to share information through the Voluntary REDD+ Database and REDD web platform. However, some countries do want broader governance of REDD+.

9. What’s happening at the moment in COP19 and where?

SBSTA agenda item 5 – will be working on methodological guidance on national monitoring systems, safeguards, and drivers of deforestation and forest degradation. They are also looking at non-market based approaches and non-carbon benefits, forest reference emissions levels/forest reference levels, and MRV (measuring, reporting and verifying).

SBI/SBSTA agenda item 6 – will be looking at adequate and predictable support, including financial, technical and technological issues. They will also consider existing institutional arrangements and potential governance alternatives.

COP agenda item 11(g) – has had a work programme since Doha last year looking at results-based finance under Matters of Finance.

10. Seems like there’s lots of talk around markets and money. Are we sure that all this increased funding is even necessary?

NO!!!!!! Like I said above, everyone thinks REDD+ needs extra money because it hasn’t blossomed particularly well. But according to these guys, that might not be so true. The problem lies more in how the money is being used: preliminary discussions drag on and projects that don’t recognise forest dependent peoples are strongly resisted. The problem is governance, not a lack of funds – and having more funds will not resolve the problem. More than anything else, government policies and the financial sector are the root causes of deforestation: without tackling those, the political will to properly implement projects will continue to be lacking, and REDD+ will continue to falter.

11. Hmmm. So, what alternatives are there?

Maybe we can talk about it another time . . . keep an eye out for Amazon Indigenous REDD+ and Bolivia’s Joint Mitigation and Adaptation Mechanism (JMAM), among others.

2 thoughts on “What the HECK is up with REDD+?!?!: A Summary Of My Struggles Up Until Now”