What was it like being an observer for a day in the last preparatory meeting for Paris COP21?

Here there is a poem that I wrote after the last ADP session (Ad-hoc working group on the Durban Platform for Enhanced Action):

The conviction for life
and the breeze of change
brought me to Bonn,
to observe how love is lost,
in the fast steps of this reunion.

Diplomacy is about to rip off its eyes,
with its smiles that retain bites,
with its war of words,
diplomacy fractures its hands.

Do I let my future in fractured hands?

About one year ago Daniel Reifsnyder from the United States, and Ahmed Djoghlaf from Algeria received a tremendous task at hand. The two experts in UN politics were selected to facilitate the last year of preparatory work to draft a new international agreement on climate change. They were selected to guide a dialogue between 196 countries to agree upon how to confront climate change. The outcome text of this last session will be the start point of negotiations about the new international agreement to be signed in Paris this coming December, 2015.

Over the last 4 years countries have met in Bonn, Germany, several times to write this draft text, which must reflect all the views and diversity of interests from developed and underdeveloped countries on climate change, which must be based in the principles of equity and sincere international solidarity, and must transform the systems that have caused climate change so we can head towards a livable world.

1) mitigation to reduce GHG emissions, 2) adaptation to climate change effects, and 3) to confront the already existing loss and damage due to climate change impacts.
For an ambitious and legally binding commitment that can lead us into a world of less than 1.5°C increase of temperature before the end of this century, we have to ensure that the new agreement is negotiated under a fair process that can enhance cooperation between countries, and strong legally binding compromises.

But what is happening inside these meetings? Is the process reliable, fair, just? Well, I can share what I observed in one day of negotiations.

Let’s continue with the poem:

I am afraid of their words,
that if they are signed, they kill.
Two men seated in a chair,
they take away our right to equity.
That’s how the robbers of memory re-write history,
how the winners of the lie of development
suffocate the lungs of the Amazon,
invade the colors of coral reefs,
submerge the body of Bangladesh,
and choose to forget thousands of cultures
under the ocean.

The dear and “distinguished” co-chairs received the mandate to condense the work of 4 years, a 90 pages text, into a shortened version that would represent in a balanced manner the view of all countries. The result of their work was a reduced version of the original text, a 20 pages “non-paper,” that took away all the references to the UNFCCC convention, all the provisions for developing countries, principles of equity, common but differentiated responsibilities and respective capabilities. This “non-paper” that was completely detrimental to the process. It stole time and watered down the effort from all countries, specifically from developing nations to reach a just agreement.

Countries are sitting in the plenary as they wait to voice out their reactions about the called “non-paper.” After the co-chairs open the plenary, I hear a voice coming from the room, it’s the ambassador Nozipho Mxakato-Diseko , representing South Africa and more than 130 countries (G77+China). She says with disappointment and strength in her voice: the non-paper “seems to attempt to rewrite, reinterpret and replace the Convention. It is extremely unbalanced (…) to the extent that it jeopardizes the interests and positions of developing countries.” In a latter intervention she states

“to negotiate back ourselves into the process is like when during apartheid were told that we need to justify and earn the (right to) vote”.

One month before starting the negotiations in Paris and the whole UNFCCC conventions has been taken out of the text, including historical responsibilities of climate change, responsibilities of developed countries to transfer finance, technology, and capabilities to developing nations for their climate action. In the room we know that our future is at stake. We will not accept a failure in Paris, and we will not accept an intransparent process.

As developing countries reject to use the “non-paper” as the basis for negotiations, they propose to be allowed to re-insert their main demands into the text. They state firmly that just after their demands are reflected in the text, they can proceed with negotiations. To support South Africa, a representative from Malaysia, explains a metaphor that brings humor and a sense of humanity back into the room: “ to justify our demands in the text is like justifying a wheel in a bicycle when you want to ride it.” That is to say, if you want to ride a bike (start the process of negotiations) you need the wheel of developing nations.

Countries spent most of the first part of the day agreeing in the process to bring back developing nations demands into the text. After they figured out the process and managed to bring back their demands, they decided to finally proceed with text-based negotiations the next day. After this long first day, the co-chairs compiled the new inputs and posted at 4am the new “non-paper” that was then 34 pages. The text brought back key inputs from developing nations. The text was now apt to be negotiated the following day.

So, what happened the second day?

Let’s continue with the poem:

When they saw me observing,
the criminals of diplomacy,
they choose to marginalize me
with the kindest words:
“we do not need you anymore
to decide your future.”

I hear a voice coming from the plenary, I also hear my disappointment “Is Japan really saying this…?”  ““We have short time for very serious negotiations. Every diplomat knows real negotiations cannot happen in front of the public. (…) This is not the time for show, but real negotiations,” said Hideaki Mizukoshi, delegate from Japan.

This is the first time that a delegate speaks out-loud to deny the right to observers to enter in a negotiation room. Delegates from the developing world stood strongly against this statement, the delegate from Malaysia said: “Don’t be afraid of civil society. We are accountable to them. The civil society organisations have invested a great deal of time, money and intellect. On what basis do we exclude them?.” (In the picture the delegate from Malaysia has received a flower from us for advocating for transparency and a just process) 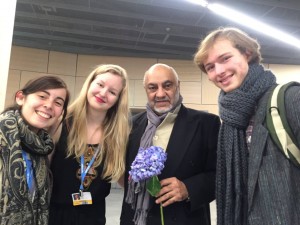 They exclude us because once we are inside this processes we realize that the negotiation field is completely unequal, that the UNFCCC framework leaves developing countries in completely disadvantage. That the UNFCCC is a political space where developed countries can block, and stand against basic commitments of solidarity, favouring corporate interests. 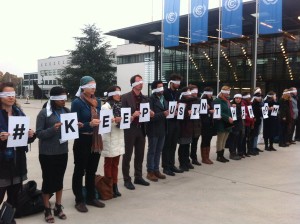 But we did not remain seated while they were negotiating destruction. Here you can watch us, protesting multiple times to get back into the negotiations.

Unfortunately, we did not manage to be given out right back. We were kicked out for the whole week.

That was my one day experience as an observer in the UN.

I have to admit that I left that conference with a strong feeling. A deep despair accompanied with profound hope. I have experienced and understood that the UNFCCC is an infertile terrain for transparency, democracy, and climate justice to flourish. I have also met wonderful people which this process brings together. People that fight in their local communities and at the international level to bring climate justice to this world.

Where will climate justice flourish?

The conviction for life,
and the breeze of change,
take me to the streets of Paris,
and the streets of the world,
to see how love finds itself
in the hopeful voices,
the rivers that spark life.

Civil society movements are already realizing that the power relies in themselves, they are saying, they are chanting “we lead, politicians follow!” With the insights on how the UNFCCC process work, and how undemocratic it is, I hope that you can unite to the voices of the world, that will stand up for a more just and equitable future that is livable for all.