I found myself walking through the bourgeois neighborhood Saint-Germain, an ornate path to a prestigious institution where I was meeting an elite group of Loss and Damage experts.  There were about twenty to twenty five people in the room, all professionals over the age of thirty, half of which were sustainable development directors of various NGOs, the other, self-involved bureaucrats.  I was the outlier.

The workshop started with a brief history of Loss and Damage in the UNFCCC:

1991: AOSIS introduces the idea of loss and damage to the UNFCCC. Loss and damage was introduced as an insurance mechanism to address sea level rise in hopes to push for greater mitigation ambition.

2007: The COP met in Bali and saw the first reference of the phrase “loss and damage”.

2013: The Warsaw International Mechanism for Loss and Damage (WIM) was established.

2014: The preliminary two-year work plan for the Warsaw Mechanism was approved at COP20 in Lima.

2016: The organization, effectiveness and technical design of the Loss and Damage Mechanism will be reviewed at COP22 in Marrakesh, Morocco.

Soon afterwards, the nine components of the loss and damage mechanism were presented:

Fortunately, our gathering was held right after the COP21 drafting text was submitted, and we were able to go over the two possible options presented for this years agreement: option I and option II.  The primer, demanded by the LDCs and G77+China, was a steep but feasible path to climate justice.  The later, “gifted” to us by the Umbrella Group + Switzerland, was a short and well groomed path to neo-colonialism and death.  Option I asked for Loss and Damage to be established as a separate article from Adaptation, to hold permanence within the final accord, to provide facilities for those displaced by loss and damage, and to integrate “innovative” finance, which the majority considers to be insurance. These are all reasonable requests that are necessary to save the most vulnerable countries from the disastrous effects of climate change, a process that is undoubtedly caused by the wealthy, developed world.  Option II was short and not-so-sweet, requesting to erase the entire Loss and Damage article from the new text, as well as the recognition of differentiation between developing and developed countries. Option II goes against the very moral grains of the UNFCCC (not that there are many) which are Common But Differentiated Responsibilities (CBDR).

The escalation of climate change requires us to examine the nuances between the geographical location of loss and damage.  It is no longer just a conversation about the divide between Global North and South, loss and damage has now become evident within the Global North through hurricane Katrina, extreme droughts in California, and destructive wildfires throughout the Pacific Northwest.  President Obama admits that even the US faces loss and damage, but his solution of thirty million dollars going to climate risk insurance falls 370 million USD short of the required 400 million USD needed to support people facing loss and damage.  Funding for loss and damage is definitely possible if you look into the US government’s budget where more than half of the budget is unnecessarily spent on civil violence: 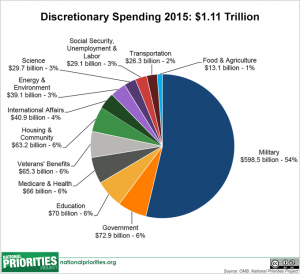 The lecturer, a negotiator on Loss and Damage, mentioned that in order to create a just agreement based on the geographical nuances of loss and damage, developed countries who are now beginning to face the damages caused by climate change need to meet with those who have been experiencing it for years.  We hoped that an equal exchange of the Annex 1’s financial means and the LDC’s direct experience adapting to natural disasters would come out of the loss and damage spin-off groups.  Unfortunately, after our theory became praxis and the US met with AOSIS about Loss and Damage, the result was the U.S. bullying small island states into giving up their demands for Loss and Damage finance, in order for the U.S. to agree with the 1.5 global temperature rise limit to be included in the text.  This was a scam, as the 1.5 policy was never legally binding, which speaks to the naivety of the UNFCCC negotiators’ opinions.

What was agreed that was needed under Loss and Damage is the financing to provide risk resilience, risk reduction, and risk resistance. Yet countries that are suffering from climate change don’t have the means to meet these three necessities, which is why Annex 1 countries need to provide grants.  The unfortunate reality of international politics is that the more powerful countries, those with higher GDPs, refuse to provide these funds.  They continue to ignore their climate debt, and instead place a legal barrier that prevents big, polluting countries to provide finance for Loss and Damage.  This is present under the compensation clause in the new next, which restricts all language of liability from entering the text.  This again, is iniquitous and ignores the backbone of differentiation within the UNFCCC.

After the Loss and Damage lecture ended, we had the space to network.  The majority of these introductions contained self congratulations disguised as comments on Loss and Damage.  There was no mention of climate justice, and when I did mention the problematic, unfair request of providing loans on interest to LDCs for loss and damage, I was quickly snubbed by a neatly manicured Swiss bureaucrat.  She then proceeded to advertise a REDD+ program in South Africa.

A week later, the final agreement on Loss and Damage was constructed in a back room with the US, the EU, and a small handful developing countries.  The product of this was a weak diffusion of the two drafting options which declared the legal permanence of the Warsaw Mechanism on Loss and Damage within the UNFCCC and the collaboration of inside and outside groups on Loss and Damage negotiations.  This is not enough. As people neglected by our governments, we must take civil protection into our own hands.