It’s unusually hot for this time of year. It reaches almost 40 degrees Celsius every day and the rains are few. Now, it’s not unusual for Ghana to have such intense heat or lack of constant rains, but this is something concerning. The end of February/beginning of March generally marks the start of the rainy season here, and it is welcomed with deep appreciation from farmers. Because there isn’t proper infrastructure to transport water to farms in most of the rural areas, these farmers depend on the rains that come every year – their cocoa trees especially. The Eastern, Western, and Brong Ahafo regions of Ghana are top producers of cocoa and depend the most on this rainy season as cocoa trees need a lot of water to produce decent yields.

In Ghana, you won’t find many large industrial farms. In fact, most of the produce consumed in this country comes from small holder farmers. These farmers split plots of land in all 10 regions of the country and transport their yields to community markets and eventually to Accra and Tema to be exported. Ghana’s smallholder farmers are truly the backbone of the food system in this country.

So to understand how the smallholder farmers of Ghana operate and what techniques and practices they are using, I set off on a rickety old tro-tro to Akim Oda in the Eastern region to spend a week with the Koomson family. 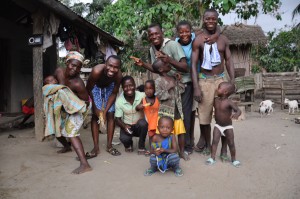 Tucked away deep in a tropical forest is a small village of four huts, two open kitchens, and one watering hole. When I mean deep in the forest, I mean about a 45 minute uphill, downhill, uphill walk from the nearest township…talk about buckets of sweat… The Koomson lives of the land, and off each other – they are a mixture of farmers, mothers, children, herbalists, and damn good cooks. At all hours of the day there are chickens, goats, and pigs running around, stealing the maize husks and attempting to eat all the cocoa beans drying out in the sun. Because they are so deep in the forest, they live without electricity and running water, and all the food that they eat is what comes from just around them. 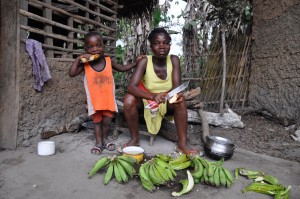 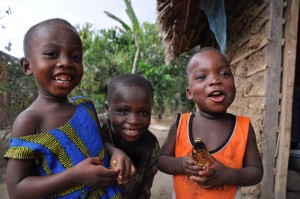 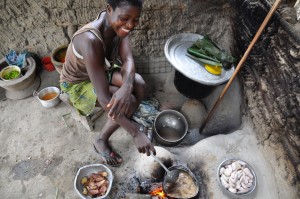 The family has stretches of land with tomatoes, okro, maize, and plantain that they sell in the markets in the nearest township. Like most smallholder farmers in Ghana, they too rely on the rains to feed their crops. But since the rains have not yet come, they are simply playing the waiting game.

They, too, are cocoa farmers like most of the other farmers in the area and have a great big plot of trees just a few minutes walk from their homestead. Once the cocoa pods have grown and matured, they are harvested and cut open to clear the insides out into a basket or onto the ground. If you’ve never seen the inside of a cocoa pod, it’s really like nothing you would expect…(no it’s not full of cocoa powder or oozing chocolate syrup). There is a sweet fruit that wraps around the cocoa bean that can be eaten prior to the drying of the beans. It’s like a sweet mixture of mango and pawpaw – who knew cocoa pods could have so many flavors? 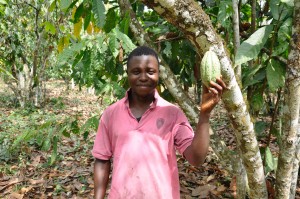 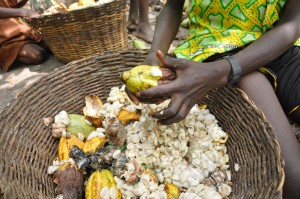 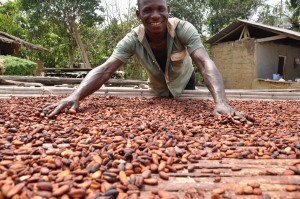 Once the beans are cleared of their sweet fruit, they are laid out to dry on a large surface for about a week, being constantly turned and mixed around so that the sun can fully kiss each little bean. After the week is up, the farmers pack the beans into a big 40kg bag and carry them to the nearest market to be sold or exported for production. While Ghana used to be the leader in cocoa production, they have fallen just behind Cote d’Ivoire due to the smuggling of beans over the border and the larger sales over there. Nevertheless, Ghanaian cocoa farmers persist and produce.

During the weekend, my colleague and I walked about 30 minutes away from the Koomson homestead to visit a much larger village called the Siawkrom village. Everyone is a farmer here – both men and women, often even the children. They are producing what almost every other farmer in Ghana produces – cassava, coco yam, plantain, banana, maize, coconuts, and cocoa. Because there is little to no mechanization on these farms, everything is done by hand and most of the farmers still use the slash and burn technique. Particularly in the area of Akim Oda, there is only one tractor that is shared between all the farmers. Getting the tractor to their land and renting it is far too time consuming and expensive – so they burn. For each new crop, they burn their land, spray it with pesticides, then plant what’s next. This is what they have always known to do. 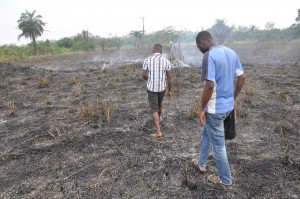 Yet the yields are still small, the plantain and banana trees are not growing as tall, and the cocoa trees are not producing as much as they used to.

So they, too, play the waiting game for the rains.

Their strength and joie de vivre is palpable and felt throughout the whole forest. These farmers are a community of helpers, always making sure everyone is living the best that they can and always lending a hand on the farms of their neighbors and friends when the need arises. And despite the forest being so large and the homesteads being so far away from each other at times, somehow everyone knows each other. Paths are marked by footsteps of farmers and women carrying buckets of water while the air is marked by the sweet, faint smell of the cocoa.

The area is rich in culture and resilience. These faces are what sustains this country. 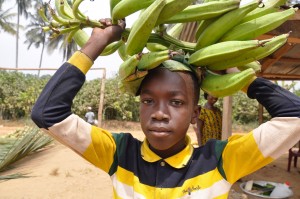 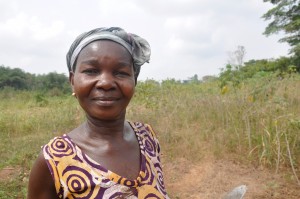 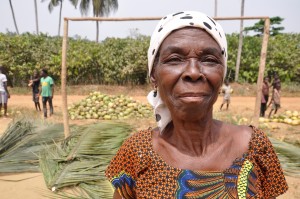 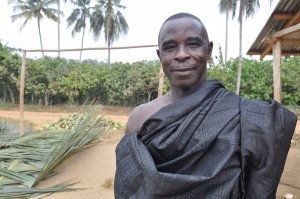 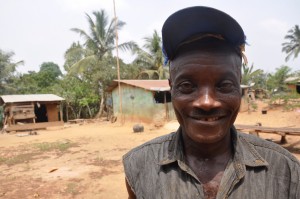 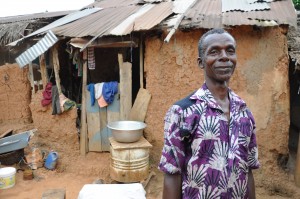