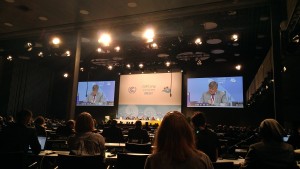 COP23 (Fiji) in Bonn officially started today and we are caught between a rock and a hard place. The Paris Agreement is a watery, empty promise, and a Polish presidency for COP24 is promising to be as dark as the ‘Coal Summit’ that will be hosted at the same time. To hold developed countries accountable to anything, however, this watery, empty promise needs implementation and clarity, never straying from the principles of the convention — common but differentiated responsibility. We need these footholds established this year: we ran out of time long ago.

So, what are the struggles up ahead in the next two weeks and beyond?!

In 2012 the Doha Amendment established a second commitment period to the Kyoto Protocol. Intended to replace the first commitment period (2008-2012), the second commitment period was supposed to be implemented from 2013 – 2020 with raised emissions targets and deeper cuts. This discussion is particularly important because it was part of the tradeoff agreed upon, along with increased finance, by developed countries in exchange for the Paris Agreement. The Doha amendment is subject to acceptance by the Parties to the Kyoto Protocol, and many developed countries (including many European members) have not ratified. The 2016 Facilitative Dialogue was supposed to address pre-2020 ambition; however, it only discussed post-2020 action and NDCs. This important political fight is being eroded — developed countries want to shift the attention to the PA, which they are attempting to morph into a mitigation-centric agreement. We cannot afford to push any real ambition to post-2020 discussions, we cannot afford to leave the Kyoto Protocol on the sidelines.

Nationally Determined Contributions (NDCs), as laid out in Article 3 and 4 of the Paris Agreement, require developed countries signatory to the agreement to communicate “ambitious efforts” to achieve the purpose of the Paris Agreement (keeping average global warming below 1.5/well below 2 degrees celsius). The problem is, developed countries are intentionally (read: shamelessly) interpreting these articles as mitigation only contributions – the scope and differentiation of what NDCs means is highly contested. This is an interpretation fight, and what the ultimate enforced interpretation is matters — and Article 4 is the battleground. The scope of what the NDCs need to include has to be broader, and responsibility has to be differentiated; most developing countries contribute negligible amounts to global warming yet bear the brunt of the burden and this has to be acknowledged. They need finance, capacity and technology transfers. If developed parties do not communicate what they can contribute towards capacity building and loss & damage, any NDC a developing country submits will be largely hypothetical. NDCs need to be differentiated with regards to need, and have to have a broadened scope which is clear and defined; ambiguity can be, and is, exploited. Mitigation is only one part of the many components of fighting this climate crisis.

To spell it out: NDCs have to include components regarding adaptation, finance, technology transfers, capacity, loss and damage, AND mitigation and responsibility has to be differentiated.

Long-term finance: In 2010 developed countries agreed to deliver US 100 billion per year by 2020 to contribute to developing nations’ effort to mitigate and adapt to the impacts of climate change. In Warsaw 2013 Parties agreed to continue deliberation on long-term finance and settled on three core elements for the period from 2014 to 2020: biennial submissions by developed countries on their updated approaches and strategies for scaling up climate finance; annual in-session workshops; and biennial high-level ministerial dialogues on climate finance (the last one happening last year in Marrakech). Despite this somewhat dubious efforts to talk about long-term climate finance, little advancement has been accomplished regarding the establishment of an updated, scaled-up long-term finance goal.

The Adaptation Fund (AF) was a heavily contested topic during last year negotiations in Marrakech. Developing countries argued that Paris had clearly established that the AF would serve the Paris Agreement (PA), and that therefore the Marrakech session should focus on the operationalization of that decision. On the other hand, developed countries insisted that before the AF could serve the PA agreement an evaluation of the AF’s effectiveness had to be done, and that further clarity regarding the specifics of how the AF would serve the PA were needed. The final decision adopted by the CMA (the COP mop for the PA) decided that “the AF should serve the PA”. Despite this small victory, there are still a few challenges that need to be addressed: institutional and governance issues of how the AF should serve the PA, and sources of funds for the AF.

Even though the Warsaw Mechanism was established in 2013, little has been done with regards to the operationalization of action and support – finance, technology transfer and capacity building for loss and damage. This springs from the fact that up to now, there is no clear definition of what loss and damage is, and no legitimate effort has been made to engage the financial mechanism of the convention. There are no real financial instruments that can properly address loss and damage, no discussion and no clear process.

Carbon market’s weave themselves into, and have strong influence, on most, if not all, countries NDCs. Civil society is tasked with the role of making sure that conversations about markets are not put in the backseat, as there is no strong party voice against carbon markets. Carbon markets are a false solution to the climate crisis. They allow for rich countries to continue to emit and have potentially devastating affects on people working within the land sector.  Carbon markets are discussed in Article 6 of the Paris Agreement and there is a fear that since there is no real understanding about accounting, what the offsetting mechanism in the Paris Agreement will be able to do, or the relationships between offsets and NDCs, that these discussion may hold up other negotiations.  In the Kyoto Protocol, market based solutions were created, resulting in developed countries having an avenue away from actual alteration to emission reduction.  The Clean Development Mechanism, developed under The Kyoto protocol, allowed Annex 1 countries to implement carbon offset projects in developing countries.  The Paris Agreement has decreased the distinction between developing and developed countries, so unlike in the Kyoto Protocol all countries in the Paris Agreement have emission reduction targets.  Therefore, developing countries are now looking at voluntary cooperation approaches with other developing countries.  Developed countries, do not approve of this, because it means that there is less incentives for developing countries to host their country’s offset projects.  Since developing countries also have commitments, the CDM has an unsure future. Despite the flaws in the CDM, it provides 5% of the finance to the Adaptation Fund.  We must ensure that there is still adaptation finance without the CDM.  The Sustainable Development Mechanism (SDM) was developed under the Paris Agreement, but it is still unclear what that mechanism will look like. Carbon markets must be approached with vigilance as to avoid allowing the wealthy to be able to emit with the justification of false.  At COP 23 many/most of the meetings discussing article 6 are closed (Thanks Venezuela … ) making it so there is less ability for pushback on false solutions.

Despite Donald Trump’s threat to pull out of the Paris Agreement in June 2016, the United States negotiators will still be roaming the halls of COP 23, bringing an agenda where they plan to “protect their economic interests.” This suggests that, despite being a country swimming in excessive resources, they will be pushing continued fossil fuel development and resistance to any kind of concrete financial commitment, including movement on loss and damage.  Countries can not officially pull out of the Paris Agreement until three years after it has entered into force, but given the United States’ current status of backing out, they have no right to be negotiating, especially if their primary goal is to sabotage any form of action. Therefore, the best strategy for dealing with the United States at COP 23 will be to isolate them.  The good news is, they are likely help us with that.  Despite the US negotiators going into the conference blind of guidance from the Trump administration, they are unlikely to be quiet and will be ready to block actions that do not align with their goals.  At COP 23 it will be important to gather information about the US’s actions so that we can better expose them and not allow them the luxury of hiding.  It is, however, important to remember that the United States has never been a leader on climate action.  Historically, they have watered down strong equity based policy and lacked serious ambition.  We can not give them abundant space that distracts from the work of other parties.

Beyond the shortcomings (or absence of) any meaningful financial mechanisms for loss and damage, L&D is lacking in urgent ways that, if focus is lost, stands much to lose on the way to COP24 in Poland. The Warsaw International Mechanism on Loss and Damage (WIM) highlights engagement with loss and damage in three ways: enhancing knowledge, strengthening dialogue, and enhancing action and support. Developed countries have conveniently focused on only the first two. There are three main things to be cited regarding (the lack of) progress on the WIM after Paris. First. Developed country Parties can triumphantly refer you to the opening of the “Clearing House for Risk Transfer”, an online repository of information regarding insurance and risk transfer, but websites are not enough, insurance is not enough. Second. The Task Force on Displacement has been constituted through the Paris Agreement under the WIM, but no major work has been undertaken.  Third. A tech paper on sources for finances towards loss and damage that was committed to in Marrakech won’t be finalized until June of 2019; the upcoming Bonn Session in May will miss the opportunity to discuss it. This is time being wasted whilst natural disaster upon natural disaster bookending this past summer reminds us that we do not have time. There is a crucial difference between distractions and real, operationalizable solutions. Losses and damages need dealing with now. This Fijian presidency has the opportunity to highlight the needs relevant to low-lying islands and the global south; loss and damage needs to be at the forefront of the chair’s agenda, and be permanently integrated into the COP and SB agendas.

It’s time to be focused and united; COP23 needs to be one with clear  and comprehensive negotiation agendas that address implementation heading into the many decisions awaiting us in COP24. A typhoon is wreaking havoc in Vietnam as this is being written — losses and damages are being incurred now by those most vulnerable and the least responsible.

We need them now.